Summary of My Mother at Sixty-six

My mother at sixty-six is a poem whose author is Kamala Das. The writer is famous for capturing the complications of relationships between human beings. This poem is one of the best examples of bonding in humans. Especially the bond between a mother and a daughter. This poem defines the fear of the author of losing her mother. My mother at sixty-six summary will elaborate on the feelings of the author and will also define the meaning of the poem. 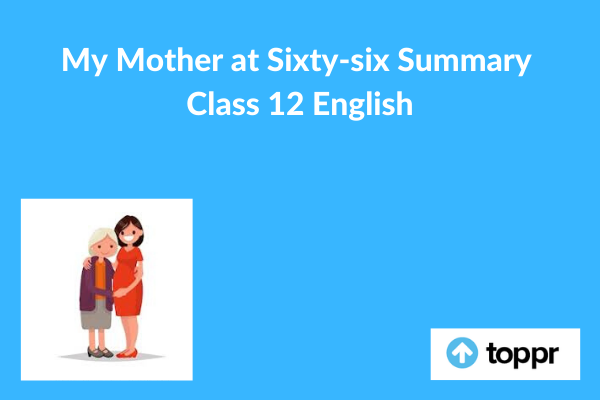 My Mother at Sixty six Summary in English

Ageing is an inescapable phase of every human’s life. A person enters their childhood, experiences adolescence when they are energetic and have so many dreams. Finally, every person approaches their old age and then they die. Relationships between people become much stronger in every phase of life. No one can’t bear the separation from their loved ones just because of ageing.

Firstly, when the author going to the Cochin airport with her mother she looks at her carefully and presents before us her image. As she looks at her mother’s soft and whitish face, she gets stuck with the fear of losing her mother. Her mother with a sleepy face and open mouth is comparable to a corpse. Here, the author shows love and affection in a relationship between a mother and a daughter.

The poet is hurt and sad and shifts her attention outside the car for driving out the undesirable feelings. She changes her bad mood. The scene from the window of the car is of rising life and energy. The fast sprinting green and huge trees alongside the cheerfully playing kids represent life, youth, and vitality. The poet here is remembering about her own childhood. In her childhood, her mother was young and beautiful. Whereas now her mother is surrounded by the fear of losing her life and that made her insecure and sad.

She reaches the airport to take her flight. It shows departure and parting which makes her sad. As she said goodbye to her mother, the image of the old mother in the dusk of years strikes her. Here again, a simile is comparable with her mother with a late-night moon of the winters. The light of the moon is an obstacle by the fog and haze as she appears older now.

The poet is now feeling the pain of getting separated because of leaving her mother. Her childhood fear of losing her loving mother now became so terrifying. Now her mother could die of old age anytime unexpectedly. She is so sad that she starts crying slowly without control but keeping a brave heart she hides her tears and starts smiling. Thus, she offers her farewell to her old mother and keeps her hope of seeing her mother alive again. She says “see you soon, Amma”. She hides her tears and sorrow as she does not want to make a painful and emotional environment. Moreover, she doesn’t want her mother to cry and shows her that she is enjoying her life. She expects her mother to be happy and enjoy her life just like her.

Conclusion of My Mother at Sixty-six