Summary of Should Wizard Hit Mommy?

Should Wizard Hit Mommy? summary will help you learn about the chapter easily. As we all know that little children absolutely love to hear stories during bedtime from adults. Moreover, the stories they hear are also fables and carry no logic. Further, to put kids to bed, the parents also make up stories to make them sleep. However, for the little ones, they are not made-up but very much true. This also affects the child growing up and they start questioning things. Thus, when they start getting older, they need to know about the reason behind why things happen and how. Similarly, parents sometimes discourage such questions. But, is it appropriate to act in such a way? This is exactly what this story will tell us. It raises a moral issue which the reader at the end may decide for themselves. 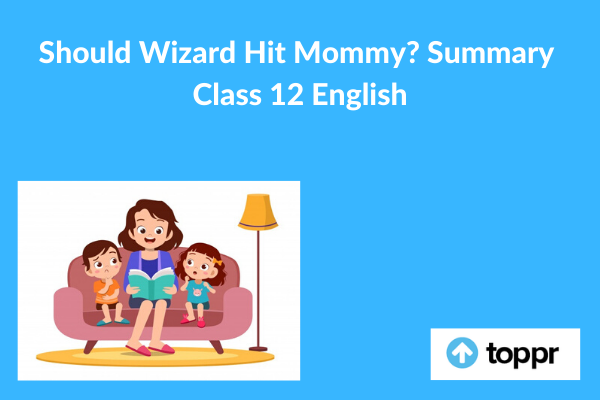 The story begins by telling us about Jack has two little kids. The kids are Jo and Bobby. Jo’s wife, Clare was pregnant with their third one. Thus, to put her daughter to bed, Jack would make up stories for her daughter. This story-telling tradition started when Jo was 2 and thus continued ever since. Jack makes sure that he tells a different story every time. However, a small creature was always common, Roger. For instance, it was either Roger Fish or Roger Chipmunk. Roger goes to the wise old owl with problems that would send him to a Wizard. Thus, the Wizard’s spell would solve the problem after payment of pennies.

Now that Jo is growing up, it is getting difficult to put her to bed for nap time in afternoons. Thus, one day Jack decides to tell her a story about Roger Skunk. In this story, there is a little skunk that always smelt very bad. It is so bad that no animals play with him and is always alone. Thus, Roger Skunk decides to go to the wise old owl. As usual, the owl sends him to the Wizard. The Wizard with his spells asks Roger Skunk about his wish. He expresses he wishes to smell like roses to which the Wizard agrees. After that, all the animals start playing with the Skunk and he plays till it gets dark. Finally, Roger Skunk goes home to his mommy. Jo thinks the story is over when Jack continues.

After reaching home, the mummy notices the awful smell and asks Roger who did this. Roger Skunk tells her that he did not like the way he smelled so he asked the Wizard to help him smell like roses. This infuriates the mother and tells him to accept himself for what he is. She goes to the Wizard all angry and asks him to return the skunk smell after hitting him.

Thus, the Wizard reverses his spell and Roger Skunk is back to smelling like he did before. However, this new ending does not please Jo. She asks Jack to change it to the Wizard hitting the mommy back. Jack did not like this protest and Jo kept insisting to change the ending tomorrow when he comes with another story. She does not listen and follows Jack back downstairs but now Jack is infuriated and threatens to give her a beating. She goes back disappointed and Jack sits with his wife in a quandary.

Conclusion of Should Wizard Hit Mommy?

To sum up, Should Wizard Hit Mommy? summary, we learn about the moral quandary parents often face when the children start growing up and thinking independently, it helps us get a glimpse into their innocent minds and adult authority over it.