Summary of the Third Level

Third Level Summary – It is a story about a 31-year-old man name, Charlie. Besides, this is a psychological story that refers to the subway at the grand central railway station which takes passengers to Galesburg. In addition, this subway becomes the interconnection between the narrator’s harsh reality and fantasy. Moreover, the third level was a way of escape for Charley. As life in the modern world is full of uncertainties worries and stress, it takes Charley to a different world that his friend also calls, “a walking dream wish fulfilment.” Further, the story is about Charley’s tendency to escape from the world. Most importantly, the third level starts because of Sam’s letter written on 18th July 1984. This story shows the connection between time and space. 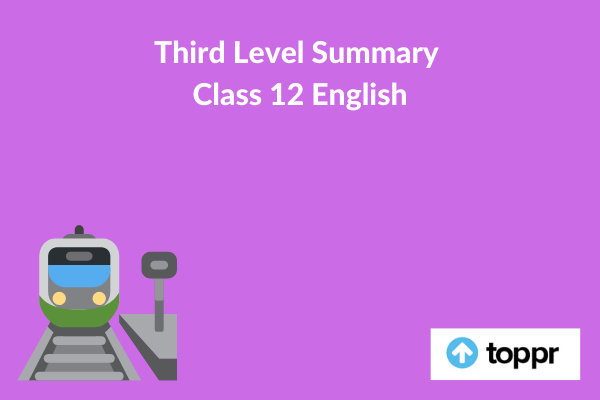 In New York, the Grand Central Station has two levels. Nonetheless, Charley a 31-year-old city resident talks that there exists a third level. Also, he claims that he has been there. To talk about this problem he visits a psychiatrist friend. He calls it a “walking-dream wish fulfilment” and explains Charley’s psychology by saying that “the modern world is full of fear, insecurity, war, and worry…..” and everybody wants to escape to some “temporary refuge from reality.” As for him, hobbies like stamp collection is an indicator of this escape.

At times the Grand Central Station seems like a maze to Charley. While taking the subway earlier he had lost his way a couple of times. One time he entered the lobby of the Roosevelt Hotel. While the other time he appeared at an office building that was three blocks away. However, this time he loses his way and something unique occurs. Charley visits the third level!

In the silent hallway, Charley keeps walking, turning left, and sloping downward, until he touches an architecturally old station, which is totally different from the two familiar levels. Moreover, this old small room with fewer ticket counters and train gates, a wooden information booth, wavering open flame gas lights and brass spittoons. All this remind him of the architecture of the 1800s. Further, he sees people in outdated outfits. When he noticed the date in the newspaper ‘The World’ he sees 11 June 1894. When he tries to buy two tickets, he realizes that he needs old currency.

He always wanted to travel to Galesburg with his wife, Louisa. Back in his head, it is “a wonderful town still, with big old frame houses, huge lawns, and tremendous trees….” The place has pleasant and long summer dusks and where people have ample of time. Hence, the next day during lunch, he exchanges three hundred dollars for old currency amounting to some two hundred only. In addition, the amount doesn’t bother him as he believes that everything there will be cheaper. However, he could never again find the corridor that leads him to the third level.

When her wife came to know about this she asks him to stop looking. Unexpectedly, his friend Sam Weiner also disappear and his wife keeps on looking for him for in the weekends. Moreover, Sam was the one whom Charley shares his idea about Galesburg.

Charley inherited the hobby of stamp collection from his grandfather. And someday while looking at the stamp collection, Charley finds a letter that was earlier not there. Also, it has the postmark on a faded six-cent stamp with a picture of President Garfield. Further, the envelop read as 18 July 1894 to Charley’s grandfather in Galesburg and it addresses Charley.

In the letter, Sam tells Charley that he has reached Galesburg and he invites Charley and Louisa there. After going to stamp and coin shop he gets to know that Sam exchange eight hundred dollars for old currency bills to establish his business in Galesburg. Besides, Sam was none other than Charley’s psychiatrist!

Through the third level, the writer wants to escape from the modern world to peaceful and quite old times.