Summary of the Tiger King

The Tiger King Summary – The story mocks the wilfulness and arrogance of those in power. The writer of the story takes us to the days when king rule. Also, they lived under the thumb rule of the British. In addition, the ruler was uninterested in serving the people instead they spent their time on foolish pursuits. They bent law to suit their interest. Besides, the Maharaja of Pratibandapuram tries to disprove his fate that the chief astrologer predicted that a tiger will kill him. So, he tries to belie the prediction and hunted down 99 tigers successfully. But the 100 tigers although not made of flesh and blood take his life. As one of the silvers of woodcut his right hand and because of infection, he dies. 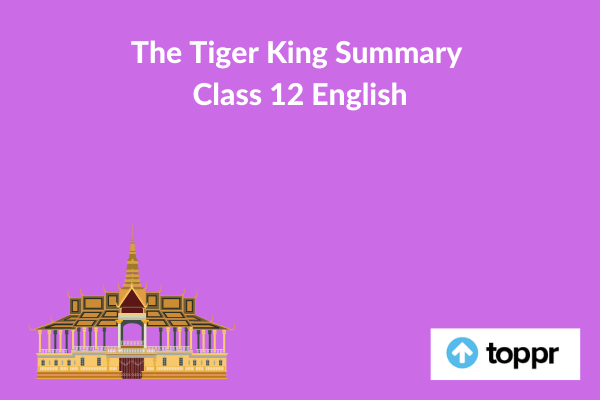 The Tiger King Summary in English

This story refers to the Maharaja Sir Jilani Hung Bahadur of Pratibandapuram. Astrologers predict his future when he was just 10 days old. Astrologers say that a tiger will kill him. On this, surprisingly the 10-day old prince said: “Let tigers beware!” The boy grows up just like any other royal child raised. Such as by drinking the milk of white cow and looked after by English nanny and watching English movies.

When he was 20, he was crowned king and came to know about the prediction about his death. So, then onwards he started killing a tiger and put a ban on the tiger hunt in his state. According to the astrologers he needs to be careful with the 100th tiger even if he successfully kills 99 tigers.

One time a high ranking British officer visits his state and wants to go for a tiger hunt. However, the maharaja declined his wish. And in order to secure the state from the wrath of the British officer. The maharaja sent 50 diamond rings to the officer’s wife whose worth was Rs 3 lakh.

Within ten years the maharaja successful slays 70 tigers. But after that, there were no tigers left in Pratibandapuram. Hence, to complete his target of killing a hundred tigers he marries a girl from the royal state that has more tigers so that he can complete his target. Whenever he visits his in-laws, he makes sure that he kills 5-6 tiger each time. In addition, in this way, he was able to kill 99 tigers but he was unable to find the 100th tiger. On not finding the 100th tiger the maharaja became violent and threatened the Dewan. In order to save himself from the fury of the king, the Dewan got an old tiger from the circus and with great difficulty put him in the forest.

He told Maharaja about the tiger. So, maharaja went on a hunt and shot the tiger and felt victorious and happy. But then again, he didn’t know that his bullet miss and the tiger was alive and he only collapsed out of fear. No one has the guts, to tell the truth to the king so they killed the tiger and brought it in a grand procession.

Lastly, the maharaja was joyful and happy. So, on his son’s birthday, he buys a wooden tiger as a gift for him. The tiger had rough edges and while playing with it he gets a woodcut in his hand which later on advances into an infection. And because of it, he dies.  Therefore, fatefully the 100th tiger although made of wood take its revenge and killed the king.

Conclusion of the Tiger King Summary

By means of the tiger king summary, the writer wants to say that no one can change what’s written in destiny no matter what they do.