He is referred to as Shaheed Bhagat Singh by all Indians. This outstanding and unmatchable revolutionary was born on the 28th of September, 1907 in a Sandhu Jat family in Punjab’s Doab district. He joined the struggle for freedom at a very young age and died as a martyr at the age of only 23 years. 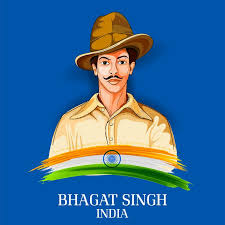 Bhagat Singh is popular for his heroic and revolutionary acts. He was born in a family that was fully involved in the struggle for Indian Independence. His father, Sardar Kishan Singh, and uncle, Sardar Ajit Singh both were popular freedom fighters of that time. Both were known to support the Gandhian ideology.

They always inspired the people to come out in masses to oppose the British. This affected Bhagat Singh deeply. Therefore, loyalty towards the country and the desire to free it from the clutches of the British were inborn in Bhagat Singh. It was running in his blood and veins.

His father was in support of Mahatma Gandhi at and when the latter called for boycotting government-aided institutions. So, Bhagat Singh left the school at the age of 13. Then he joined the National College at Lahore. In college, he studied the European revolutionary movements which inspired him immensely.

Bhagat Singh read many articles about the European nationalist movements. Hence he was very much inspired by the same in 1925. He founded the Naujavan Bharat Sabha for his national movement. Later he joined the Hindustan Republican Association where he came in contact with a number of prominent revolutionaries like Sukhdev, Rajguru and Chandrashekhar Azad.

He also began contributing articles for the Kirti Kisan Party’s magazine. Although his parents wanted him to marry at that time, he rejected this proposal. He said to them that he wanted to dedicate his life to the freedom struggle completely.

Due to this involvement in various revolutionary activities, he became a person of interest for the British police. Hence police arrested him in May 1927. After a few months, he was released from the jail and again he involved himself in writing revolutionary articles for newspapers.

The Turning Point for Bhagat Singh:

The British government held the Simon Commission in 1928 to discuss autonomy for the Indians. But It was boycotted by several political organizations because this commission did not include any Indian representative.

Lala Lajpat Rai protested against the same and lead a procession and march towards the Lahore station. Police used the Lathi charge to control the mob. Because of Lathi charge police brutally hit the protestors. Lala Lajpat Rai got seriously injured and he was hospitalized. After few weeks Lala Ji became shaheed.

This incident left Bhagat Singh enraged and therefore he planned to take revenge of  Lala Ji’s death. Hence, he killed British police officer John P. Saunders soon after. Later he and his associates bombed the Central Legislative Assembly in Delhi. Police arrested them, and Bhagat Singh confessed his involvement in the incident.

During the trial period, Bhagat Singh led a hunger strike in the prison. He and his co-conspirators, Rajguru and Sukhdev were executed on the 23rd of March 1931.

Bhagat Singh was indeed a true patriot. Not only he fought for the freedom of the country but also he had no qualms giving away his life in the event. His death brought high patriotic emotions throughout the country. His followers considered him a martyr. We still remember him as Shaheed Bhagat Singh.