Acid Rain includes rain, snow, hail, fog, or dew that is high in acid pollutants, especially sulphuric and nitric acid. Acid Rain is mainly caused by emissions of sulphur dioxide and nitrogen oxide from various sources. They react with the water molecules in the atmosphere to produce acids. The problem of Acid Rain has not only increased with rapid growth in population and industrialization, but it has also become more harmful. In fact, the use of the tall chimneys on a factory, ship, has contributed to the spread of Acid Rain by releasing gases into the atmosphere. A large number of acid deposits are witnessed in Canada, the United States, Europe, portions of Sweden, Norway, and Germany. Some amount of acid deposits are found in parts of South Asia, South Africa, Sri Lanka and Southern parts of India like Bangalore, New Delhi, Mumbai. 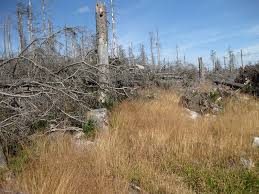 There are two types of depositions in which acid rain occurs. They can be discussed as follows:

The major causes of acid rain are Natural and Human-Instigated causes. However, Acid Rain is basically caused due to the combustion of fossil fuels which results in emissions of sulphur dioxide (SO2) and nitrogen oxide (NO2) in the atmosphere.

Human-Instigated Sources: Human activities leading to the emissions of chemical gas include sulphur and nitrogen gases from the factories, power generating premises and automobiles. Mainly, the use of coal for electrical power generation is the biggest contributor to gaseous emissions. These also lead to acid rain. These gases react with water, oxygen, and other chemicals to form various acidic compounds such as sulphuric acid, nitric acid, etc. As a result, those areas experience exceedingly high amounts of acid rain.

Acid Rain adversely affects the environment includes marine biodiversity, soil, architecture & infrastructure, forests, and forest wildlife, public health. For example, Taj Mahal is turning yellow mainly due to air pollution, discoloration of marble due to oxidation of its constituents is one of the harmful effects of acid rain.

Acid Rain caused due to the natural reasons cannot be stopped. But there are ways following which we can avoid the same, caused due to man-made reasons. The ways by which acid rain can be avoided are by the use of limestone by which people can repair the damages caused by acid rain to lakes, rivers, brooks, and other water sources. By adding lime into acidic surface also we can avoid acid rain as water balances the acidity.

Use of hybrid vehicles with negligible NO2 emissions is also a way out. Besides fossil fuels, there is a wide range of substitutable energy sources that can generate electrical power these include wind energy, solar energy, geothermal energy, nuclear power, and hydro energy. Using these energy sources can offer effective electrical power alternatives. Instead of using fossil fuels, use of natural gas, fuel cells and batteries can also substitute use of fossil fuels.

As you can see, there are many attempts to clean our air. Due to increase in population and rapid industrialization, we need to make efforts on a war footing to reduce the phenomenon of Acid Rain. The whole world needs to take a call to avoid inflicting colossal damage to the environment.