Albert Einstein was a physicist who is responsible for developing the famous general theory of relativity. Furthermore, he is one of the most influential and celebrated scientists of the 20th century. Let’s take a look at the life and achievements of this genius with the essay on Albert Einstein. 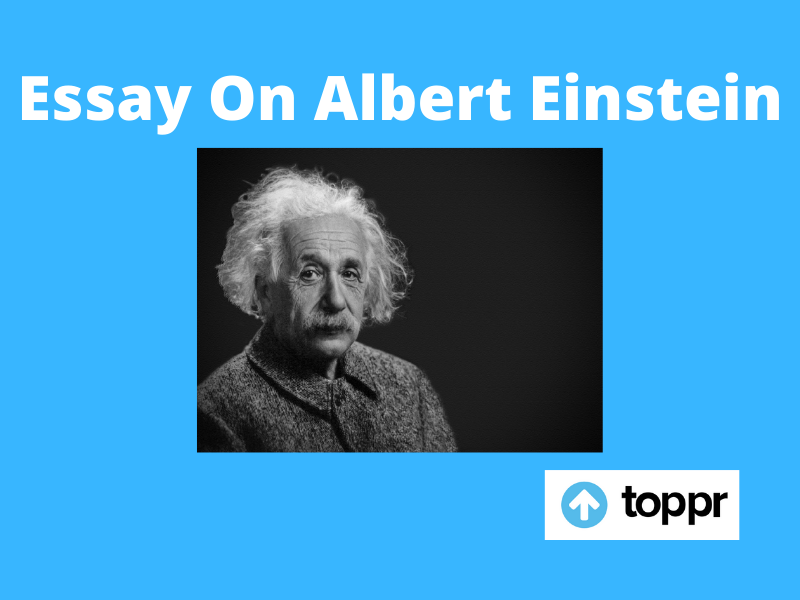 Albert Einstein was born in Germany into a Jewish family on 14th March 1879. Furthermore, Einstein had to deal with speech difficulties early on but was a brilliant student at his elementary school. His father, Hermann Einstein founded an electrical equipment manufacturing company with the help of his brother.

At the age of five, Albert’s father showed him a pocket compass. Moreover, this made him realize that the needle was moving due to something in empty space. According to Einstein, this experience left a deep and lasting impression on him.

In 1889, a ten-year-old Albert became introduced to popular science and philosophy texts. This happened due to a family friend named Max Talmud.

Albert Einstein spent time on books like Kant’s ‘Critique of Pure Reason’ and ‘Euclid’s Elements’. From the latter book, Albert developed an understanding of deductive reasoning. Furthermore, by the age of 12, he was able to learn Euclidian geometry from a school booklet.

Einstein’s father’s intention was to see his son pursue electrical engineering. However, a clash took place between Albert and the authorities. This was because Albert had resentment for rote learning as, according to him,  it was against creative thought.

In 1894, Einstein’s father’s business failed and his family went to Italy. At this time, Einstein was only fifteen. During this time, he wrote ‘The Investigation of the State of Aether in Magnetic Fields’, which was his first scientific work.

In 1901, there was the publishing of a paper by Einstein on the capillary forces of a straw in the prestigious ‘Annalen der Physik’. Furthermore, his graduation took place from ETH with a diploma in teaching.

In the year 1905, while working in the patent office, there took place the publishing of four papers by Einstein in the prestigious journal ‘Annalen der Physik’. Experts recognize all four papers as tremendous achievements of Albert Einstein. Therefore, people call the year 1905 as Einstein’s wonderful year’.

The four papers were special relativity, photoelectric effect, Brownian motion, and equivalence of matter and energy. He also made the discovery of the famous equation, E = mc².

The theory of relativity was completed by Einstein in 1915. The confirmation of his theory was by British astronomer, Sir Arthur Eddington, during the solar eclipse of 1919.

There was the continuation of research works by Einstein and finally, in 1921, his efforts bore fruits. Most noteworthy, the Nobel Prize in Physics was awarded to Albert Einstein for his services to Theoretical Physics.

Conclusion of the Essay on Albert Einstein

Albert Einstein’s contribution to the field of physics is priceless. Furthermore, his ideas and theories are still authoritative for many physicists. Einstein’s lasting legacy in physics will continue to be an inspiration for young science enthusiasts.

FAQs For Essay on Albert Einstein

Question 1: What is the legacy of Albert Einstein?

Answer 1: Albert Einstein is one of the world’s greatest physicists and a Nobel Laureate. Furthermore, his greatest achievement is the theory of relativity which made a significant change in our understanding of the universe like. However, this wasn’t his only legacy as Einstein was also a refugee and a humanitarian.

Answer 2: Einstein’s E = MC2 is the world’s most famous equation.  Furthermore, this equation means that energy is equal to mass times the speed of light squared.  Moreover, on the most basic level, this equation tells us that energy and mass happen to be interchangeable and that they are different forms of the same thing.