A compass is a small but very useful navigating instrument. It contains a freely suspended magnet. This magnet displays the direction of the horizontal component of the Earth’s magnetic field at that point. The magnetic compass is the most important and reliable instrument.

It has the origins long back from 2300 BC. But the Chinese development of the compass card during the 14th century. Also, the sophisticated instrument that we know today became stabilized in the 19th century. 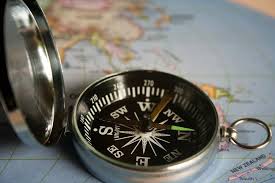 Magnets are the objects having a north and south pole at opposite ends. A magnet contains electrons that have both uneven orbits and uneven spins. Inside each domain, magnetic atoms align in straight rows.

Moreover, all these domains line up in the same direction. We can easily notice about magnets that opposite poles brought near each other attract, and like poles repel. Magnets produce forces also called as Magnetic force.

What is a Magnetic Compass?

The magnetic compass is a primary means of navigation as a direction indicating device, especially on a ship. The Magnetic Compass is the most known compass type. It functions as a pointer to “Magnetic North”.

It contains a magnetized needle at its heart which aligns itself with the horizontal component of the Earth’s magnetic field. So when we hold a compass at a level then its needle turns until it settles into its equilibrium orientation.

These geographic poles are the points on the Earth’s surface where the line of the Earth’s axis of rotation meets the surface. We call the geographic north pole as the true north.

The Principle of the Compass

A Magnetic compass is a very critical piece of marine navigational equipment. It has a magnetized needle which suspends freely. It points North because of the forces caused by the Earth’s magnetic field. After knowing North, the other directions are easily found.

A magnetic compass works because the Earth is like a very big magnet and surrounded by a huge magnetic field. The Earth has two magnetic poles near the North and South poles. This magnetic field of the Earth causes a magnetized ‘needle’ of iron or steel to swing freely into a north-south position.

A compass works easily by utilizing the Earth’s magnetism in order to find directions. After its invention, people become unable to perform navigation over long distances across the sea. A compass points towards the north because all magnets have two poles, a north pole, and a south pole.

The north pole of one magnet is attracted towards the south pole of another magnet. As we know that the Earth is a magnet which can interact with other magnets in this way. Thus, the north end of a compass magnet is drawn to align with the Earth’s magnetic field.

Since the Earth’s magnetic North pole attracts the “north” ends of other magnets, so it is technically the “South Pole” of our planet’s magnetic field.

Accuracy of the Magnetic Compass

During the 15th century, mariners have noticed that the needle of a magnetic compass does not point accurately to the true north of Earth. Instead, the needle makes an angle with true north, and that angle varies from one place to another place on the Earth’s surface.

Thus, there is a different magnetic variation for different places on Earth. These variations were investigated on a famous 17th-century voyage by Edmond Halley. It was thought at that time that the longitude of a ship could be found by the compass variation, which was proved to be wrong.

Q. What are the two variants of Magnetic compass?

Ans. Its two variants are: