The cyclones are irregular wind movements that are characterized by closed air circulation around a centre of low pressure. Furthermore, this essay on cyclone will throw more light on the unique phenomenon of cyclones. The main cause of cyclone closed air circulations are the atmospheric disturbances and the Earth’s rotation which imparts a whirling motion to these disturbances. 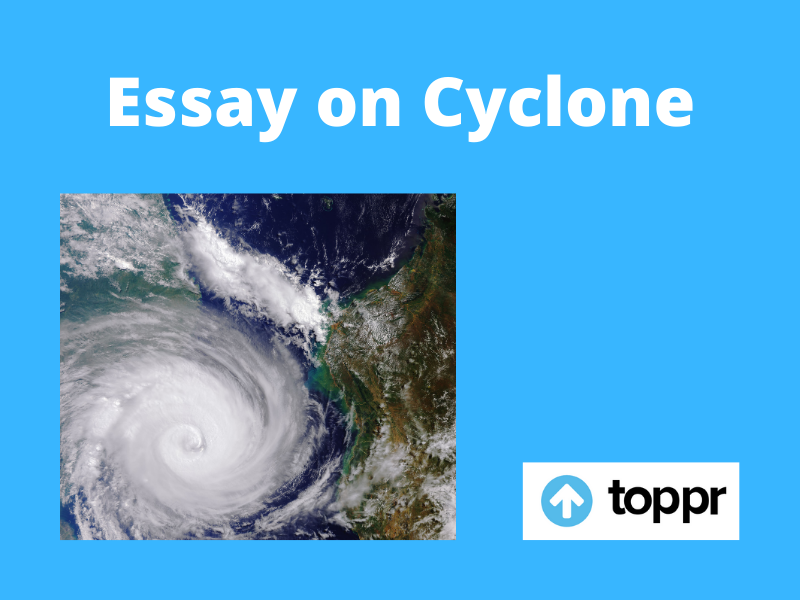 These storms populate the middle and high latitudes in the northern hemisphere. Consequently, experts call them mid-latitude cyclones. The storm is called a “bomb cyclone” in case the barometric pressure of a mid-latitude cyclone falls by at least 1 millibar per hour for a period of 24 hours.

A tornado refers to a rapidly rotating column of air whose characterization is by a downward extension from a thunderstorm to the ground. Furthermore, the most violent tornadoes can cause tremendous destruction with massive wind speeds that can go as high as 300 mph.

The formation of tornadoes takes place in regions of the atmosphere that are characterized by abundant moist and warm air near the surface with drier air above. Moreover, a change takes place in wind direction and speed with height above the ground.

The cyclones level down inequalities of wind movement and pressure over the globe. Furthermore, they play a crucial role in the complex heat exchange process that takes place between various latitudinal zones. Moreover, cyclones have an effect on the phenomenon of precipitation as they facilitate the lifting up of the moist air from oceans and taking it into the surrounding landmasses.

The cyclonic wind movements happen to be anti-clockwise in the northern hemisphere while in the southern hemisphere they are clockwise. Furthermore, the characterization of the cyclones takes place by the existence of an anticyclone between two cyclones. Moreover, the cyclones can be either tropical or temperate/extra-tropical depending on their area of origin and principal tracks followed.

Conclusion of the Essay on Cyclone

Cyclone is a weather phenomenon that always has had a tremendous impact on humanity since time immemorial. Furthermore, the cyclone can certainly be dangerous for humanity as they can bring widespread destruction to humanity. Most noteworthy, it is a weather system that we would just have to live with and cope with.

FAQs For Essay on Cyclone

Question 1: What are some of the effects of cyclones?

Answer 1: Cyclones can bring high winds and heavy rain. In extreme condition, the speed of winds may go over 240 km per hour. These strong winds may cause a devastating phenomenon known as the storm surge, along with destructive torrential rain.

Question 2: What are the various types of cyclones?