Lal Bahadur Shastri was born on 2nd October 1904 at Mughal Sarai in Uttar Pradesh in India. His father’s name was Sharda Prasad and he was a school teacher. His mother’s name was Ramdulari Devi. Lal Bahadur Shastri’s father died when he was only one year old. He has two sisters. After his father’s death, his mother Ramdulari Devi took him and his two sisters to her father’s house and settled down there. 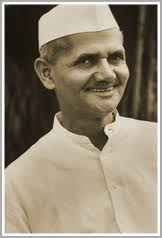 Lal Bahadur Shastri was drawn towards the national struggle for freedom when he was a boy. He was very impressed by Gandhi’s speech which was delivered on the foundation ceremony of Banaras Hindu University. After that, he became a loyal follower of Gandhi and then after jumped into the freedom movement. Because of this, he had to go to jail many times. Lal Bahadur Shastri was always believed that self-sustenance and self-reliance as the pillars to build a strong nation. Lal Bahadur Shastri wished to be remembered by his work rather than well-rehearsed speeches proclaiming lofty promises. He was always against the prevailing caste system and therefore decided to drop his surname and after his graduation, he get Shastri surname.

In 1947, after India got independence Lal Bahadur Shastri got the portfolio of transport and Home ministry. In 1952, he was given the Railway ministry. When Jawaharlal Nehru died Lal Bahadur Shastri succeeded him as the Prime Minister for a very short time of only 18 months. In 1965 war he got his achievements after the victory on Pakistan. On 11th January 1966, he got a severe heart attack and he died.

After the Chinese aggression of 1962, India faced another aggression from Pakistan in 1965 during Shastris tenure and Lal Bahadur Shastri showing his mettle and made it very clear that India would not sit and watch. While granting liberty to the Security Forces to retaliate he said: “Force will be met with force”. Lal Bahadur Shastri was first as the Minister for Transport and Communications and then as the Minister of Commerce and Industry. In 1961 he was the Minister for Home and formed the “Committee on Prevention of Corruption” headed by of K. Santhanam.

Lal Bahadur Shastri was also known for his simplicity, patriotism, and honesty. India lost a great leader. He had given the talent and integrity to India. His death was still a mystery. Lal Bahadur Shastri had political associations is Indian National Congress. He had the political ideology such as nationalist, liberal, right-wing. Lal Bahadur Shastri is a Hinduism religion. He was always self-sustenance and self-reliance as the pillars to build a strong nation.