500 Words Essay On Reservation in India

Reservation is a controversial and highly debatable topic in India. Furthermore, the main aim behind the reservation was the empowerment of the weaker sections of society. So, let’s learn all about it with this essay on reservation in India. 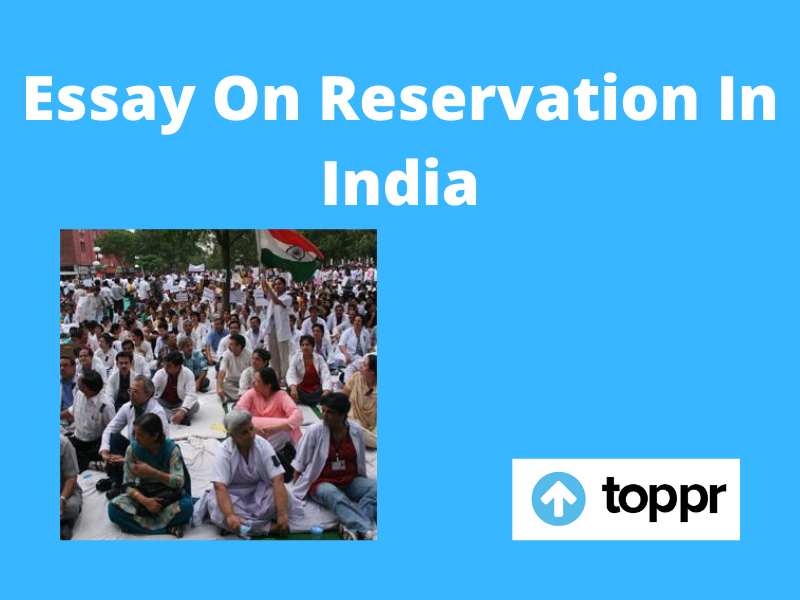 Essay On Reservation In India

Reservation in India refers to the practice of reserving a certain percentage of seats in government institutions for people belonging to backward and under-represented communities. Furthermore, reservation in its essence is a type of quota-based affirmative action.

The primary beneficiaries of the reservation policies under the Constitution are the Scheduled Castes (SCs), Scheduled Tribes (STs) and Other Backward Classes (OBCs). Furthermore, this concept was made part of the Constitution in order to let the deprived classes come at par with the privileged classes.

One can attribute the origin of the reservation system to the age-old caste system of India. According to the caste system, the division of the people was to take place on the basis of occupation. As such, various sects came up like teaching and preaching (Brahmins), kingship and war (Kshatriya), and business (Vaish).

Soon, however, the system became an instrument of dividing the society on the basis of caste. Furthermore, this led to the creation of various walls between the different sections of society. After independence, the main objective of the reservation policy was to uplift the untouchables who had to suffer maximum marginalization.

Unfortunately, there has been the failure of the policy to achieve its aim to uplift the marginalised classes. Rather, the reservation policy has become a political tool in the hands of politicians. Furthermore, the rift in the caste system is becoming deeper.

The 93rd Amendment stirred the anger of the youth, in general, all over the country. Furthermore, protests took place from various sections of society. Moreover, the reason for the anger of the youth was that the development of one section of the society cannot take place at the cost of the other sections.

Conclusion of Essay on Reservation in India

Reservation in India has been playing a major role in the politics of India. Furthermore, it has now become an integral part of Indian society, in spite of the criticism it had to face. Overall, it can be said that while the intention behind reservation cannot be blamed, it is the faulty implementation that has been the main problem.

FAQs For Essay on Reservation in India

Question 1: What is the need for reservation in India?

Answer 1: Reservation primarily relates to three groups: Scheduled Castes, Scheduled Tribes, and Other Backward Classes whose abbreviation takes place as SC, ST, and OBC respectively. Furthermore, these less privileged groups have suffered oppression or unfairness in India. Consequently, the aim of reservations is to prevent caste supremacists from denying these groups their rights.

Question 2: Is the reservation of elected seats permanent in India?

Answer 2: The original requirement of Article 334 of the Constitution was to cease the reservation of elected seats in 1960. However, its extension took place to 1970 by the 8th Amendment and then to 2020 by the 95th Amendment. Due to the 104th Amendment, a further extension has taken place in the period of the reservation to 2030.