Traffic jam is the situation when vehicles are stopped completely for some time period on the roads. Also, vehicles have to wait for a long time to move out of the jam. Sometimes it becomes like congestion in traffic. This happens in transport network due to the increasing vehicles and overuse of roads. Often it is due to slow speed, longer trip time and increased queues of vehicles. Therefore, traffic jam is becoming a major issue mostly in all cities. 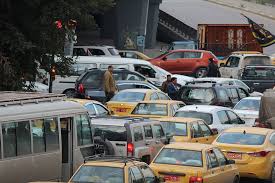 Problems arising due to Traffic Jam

Let us discuss some major problems that arise due to high traffic:

Let us have a look at some chief disadvantages of traffic jams in detail below:

Some suggestions to solve the traffic jam problem are as follows:

Thus, traffic jam is a serious issue in every big city that causes several problems for common people. It consumes so much of time and energy unnecessarily and hence the loss of the nation. Therefore, serious measures have to be taken by the authorities to control traffic and promote the use of public transport. Development of public transport network at economical rates is essential. Implementation of traffic safety rules by traffic police is a must. People should drive more sensibly and responsibly. Hence we all can work in this way to solve the big threat of the current time.