The surface of the earth is heating up at a rapid pace. Till date sixteen out of total seventeen warmest years have been recorded after the year 2000.  Melting of glaciers, rising of sea levels, decrease in the forests, danger, and scrambling of wildlife. We can trace back all the above consequences to one common factor Global Warming. How? Let us know!

Climatic researchers of WHO suggest global warming is the reason for around 150,000 deaths every year globally, according to an article published in Scientific American in 2009. Global warming is responsible for the rise in temperature. Data from NOAA and NASA indicates that the year 2016 was the hottest year since the inception of climate record keeping from 1895. There has been an overall increase of 0.8 of over the stretch of 100 years.

Earth surface has the ability to absorb almost 75% of the entire solar energy. This is responsible for the increase in temperature. However, part of the energy is given back to the atmosphere in the form of radiation. There are certain gases that have the ability to trap heat and restrict the heat from escaping from the atmosphere.

These gases are called greenhouse gases. Example of greenhouses gases includes ozone, methane, carbon dioxide, chlorofluorocarbon (CFC), etc. These gases absorb heat and add to the process of heating of atmosphere thereby raising the temperature. This phenomenon is global warming.

Check out our detailed article on Global Warming here.

Greenhouse Effect & Its Use

What is greenhouse effect? Was greenhouse effect always a bad news?  The answer to the second question is no. It is useful in certain cases. There are certain places where the temperature is quite low. In those places greenhouse room, glass surrounded room helps to grow vegetables, fruits, and flowers. The energy from the sun enters the room.

The room is made up of glass and it helps to retain the heat inside the room. Therefore, the solar energy helps in warming the soil and aiding in the plant growth and vegetation. However, the temperature of the outside will always be lower than the temperate inside the greenhouse. Moreover, the soil and plant release infrared radiation. Thus, the glass reflects part of the energy and absorbs part of it.

Similarly, greenhouse effect helps in the sustenance of life and temperature. The atmosphere of the earth has a blanket of air which surrounds us just like the greenhouse room. The atmosphere has the ability to restrict the heat and trap it around the earth. This phenomenon is a natural greenhouse effect. Thus, it helps in keeping earth warm thereby maintaining temperature and sustenance of life.

The major gas that contributes to absorption of heat is carbon dioxide. Other greenhouse gases are methane, nitrous oxides, CFCs, and ozone. Initially, the production of gases was within permissible quantity. Therefore, it was useful in maintaining the natural balance and life sustenance. However, the growing anthropogenic or human activities are constantly increasing the gases beyond the permissible limit.

Global warming is responsible for melting of glaciers, the rise in sea level, flooding of the coastal regions and an overall increase in the temperature. The rise in temperature is also the reason behind increase incidence of diseases such as yellow fever, malaria, dengue among others. This is Greenhouse Effect. 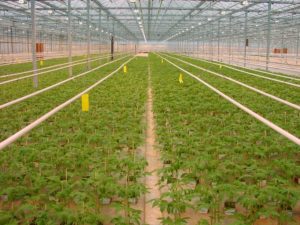 We all know that earth is the only planet that can support and sustain life, rest of the planets have extremely cold or hot temperature. The presence of the thin atmospheric layer makes it possible to support life. The thin layer of the atmosphere contains greenhouse gases like CO2, water vapour, methane gas, nitrous oxide, etc that has the ability to absorb sun rays and warm up the planet.

This prevents the earth from becoming too cold. The absence of greenhouse effect will make the Earth’s average temperature to be nearly 60° Fahrenheit, an extremely cold planet. Hence, life would be impossible without the greenhouse effect. However, the concentration of greenhouse gas is on the rise since the 18th century.

At present, the carbon dioxide level is have increased almost to 40%. The levels of greenhouse gases are at its all-time high than the previous 650,000 years and are continuously rising. This is because the modern life and changes in the lifestyle of humans have led to the constant release of heat-trapping gases or greenhouse gases. This is constantly warming up the atmosphere. 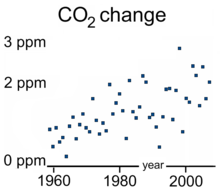 It is essential to balance the incoming solar energy by radiating part of energy back to space. We know planet Earth is much colder in comparison to the sun. There are particular chemical compounds or gases present in the atmosphere that allow passing of shortwave radiation (solar energy). This will in turn heat the water bodies and lands.

However, earth after warming up will radiate the energy at much longer wavelengths (infrared light). Land and ocean emit this radiation and the atmosphere along with the clouds absorbs the radiation. Hence, the radiation will again reradiate back to the Earth due to the presence of the greenhouse gases such as carbon dioxide, methane, CFC, nitrous oxide, etc. This is known as greenhouse effect. 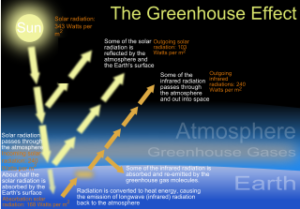 The greenhouse effect is heating up the Earth’s atmosphere. Greenhouse gases are a rapidly rising problem because it is responsible for climatic change at a faster rate. It is becoming difficult for some living organisms to keep pace with this climatic change and unable to adopt the change. This is creating new and unique challenges to all life forms.

The production and transport of natural gases such as coal and oil release methane. The release of methane gas is also possible from livestock practices, agricultural practices and decomposition of organic waste present in the solid waste landfills.

Combustion of solid waste and fossil fuels releases nitrous oxide. Moreover, industrial and agricultural activities are the cause for release of this greenhouse gas.

The burning of fossil fuels such as coal, tar, and natural gas releases CO2.  Burning of waste materials, wood and trees release CO2. Furthermore, the land use changes, deforestation, and soil degradation are the possible causes for adding up to the already existing CO2 quantity. 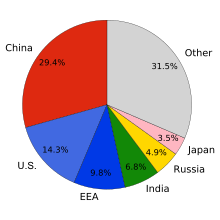 Bunch of gases including hydrofluorocarbons, sulfur hexafluoride, and perfluorocarbons, etc are the fluorinated gases released during many commercial and industrial activities. Sometimes the gases are released due to household activities. However, these gases do not occur naturally. In certain cases, these chemicals are the replacement for ozone-depleting compounds like CFCs. However, they are equally harmful if not more.

The major climate change due to global warming is definitely a significant increase in global temperature. Moreover, the rise in temperature is the reason behind many deaths. It is also the cause of the increase in the incidence rate of some diseases such as dengue, malaria, etc.

Global warming is a threat to animals and plants. It is disturbing the entire ecological balance of the environment. Melting of polar ice caps and glaciers is increasing the rise in the water levels (sea and ocean) all around the globe. Furthermore, freshwater resources are reducing day by day.

According to scientific organizations like NASA, WHO and such, global warming is responsible for extreme weather incidences, ocean acidification, and many other similar impacts that are affecting the society and nature. However, it is possible to cease these drastic problems by adopting proper changes to our very own lifestyle.

Therefore, it is very important to participate in strong international agreements by countries across the globe and together work to save the planet and change the environment. 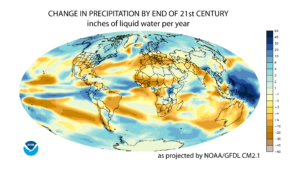 Change in Precipitation by End of 21st Century (Source: Wikimedia)

Question: The gradual reduction in the amount of the direct irradiance on a global scale at the surface of Earth is