Douglas McGregor was born in the year 1960. He was a great a thinker, leader, management and leadership theorist. Douglas postulated over three decades ago that every leader has core assumptions about human nature and these assumptions influence the style of leadership practiced by the leader. His views on leadership are of great significant value because he was the 1st to apply behavioral science findings to the world of business and leadership.

Theory X advanced the view that human beings have an innate dislike for work. They can only be made to get results at work by the application of coercive methods and by direction. Theory X stresses on the authoritarian style of leadership where results are the focus of leadership and it is more work-centered than people-centered.

Theory Y approach to management is more people-centered. Here the individual is valued and appreciated. Theory Y submits that when workers are given the right kind of environment, they can reach their highest potential and can be of great value to their organizations.

A few numbers of authors consider McGregor’s work as a basic theory of motivation, whereas others feel it is a philosophy of human nature and fits more logically into a discussion of leadership than basic motivation theories.

McGregor’s ideas about leadership and managerial behavior had a great effect on management and leadership thinking and practice. Traditional leadership had been hierarchical and highly controlling where employees always looked up to leaders and depended on them.

This could be very disempowering and a waste of human talent and potential. McGregor thought that if leaders did not scrutinize certain core assumptions they have about people; it could restrict their appreciation and view of the strength of the human capacity for growth, collaboration, and development. 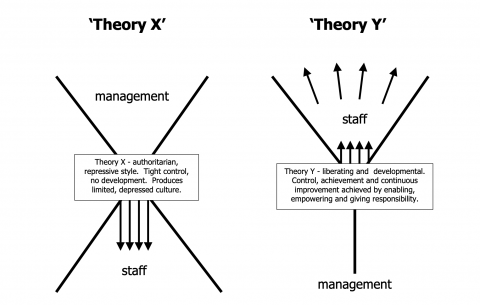 McGregor postulated, that leaders who hold Theory X assumptions believe that people are lazy, abhor responsibility and not motivated and therefore need to be coerced before they will work and show commitment.

Such a leadership assumption leads to very close supervision and control of workers and siphons the ingenuity of workers and results in a lack of motivation in workers.

Leaders, who practice Theory Y assumptions, on the other hand, involves workers to engage in joint problem solving, to understand the needs of team members and to integrate personal needs of achievement with organizational objectives.

Although with such an approach the leader facilitates and initiates the control process, it is done with the involvement of the workers in mind and can be encouraging and motivating for them.

Ques. Which of the following is credited with the development of Theory X and Theory Y?

Ans.  Option ‘B’ is the correct answer