The term ‘leader’ is not unknown to us. In laymen terms, a leader is a person who controls others. In terms of management, it is not that simple. It is integral as well as an important part of management. In management terms, a leader is a person who has the potential to guide and influence a group of people towards a particular direction or objective. Hence, leadership is the process of leading a group of people or an organization in a particular direction. There are various guiding forces in the form of various leadership models and theories. One of these is the Contingency Theory of Leadership. In this article, we will look at this approach and find out its various aspects.

What is Contingency Theory of Leadership?

Contingency Theory of Leadership is a very special kind of approach which states that the success of a leader does not only depend on his abilities.

There are many other factors relating to the work environment, company culture and employees which impact a manager’s success in the process of leadership. 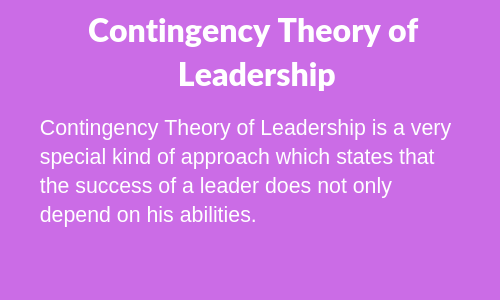 Hence, his success is contingent on his roles.  This model is given by Fiedler.

That is why, many times, it is called as ‘Fiedler Contingency Model of Leadership’. Moreover, An integrated model of leadership has been proposed by George Terry.

History of Contingency Theory of Leadership

Fred Fiedler gave the Contingency Approach of leadership in 1958 during his research of leader effectiveness in group situations. He was of the belief that the success of a leader depends mainly on two factors, viz, Control of the situation and the manager’s set of skills.

Thus he believed that the abilities or the skills of the manager remain fixed whereas the situation keeps on changing.

So, a leader’s effectiveness is contingent on the leader’s style matching the situation, not adapting to it. A leader will be most effective when his features and styles of leadership will match with the situation and environment around him.

The basis of this approach is quite simple. It states that people with different abilities can perform better in their respective fields.

For example, a person with all the relevant skills, education, and training in the selling of books will prove to be more successful in the field of books marketing rather than the production of laptops.

Similarly, a manager has his own set of skills, abilities, ways, experiences, and preferences which may not be successful universally in all the leadership roles.

Leader himself is a very important and integral part of leadership.

His personal values, deep beliefs, and convictions shape his behaviour. Leader’s confidence in the group members, the extent of power-sharing and general circumstances play an important role. His self-awareness is also very important.

A leader will be effective only if his/her employees are always ready to follow his directions and commands. His efforts will be a complete waste if his employees are of different opinions.

That is why some managers are effective in one aspect or field may turn out to be less effective in another aspect due to different attributes and personalities of the employees.

For Example, IT employees like very less delegation of work and desire more and more autonomy in work. This may lead to a lot of problems for a manager to lead a group.

Organization too plays an important role in the degree of the functioning of the leadership. Nature and type of organization influence the practice of leadership.

Whenever there is a high degree of dependence between various departments in the organization, the leadership becomes more and more important.

It is because in such case the workers start focussing on their respective work only without thinking about the effect of their action on other departments. In the case of high structured tasks, the managers have more power and influence on the workers because the workers’ behaviour under such structure is rigid.

Moreover, in the case of uncertain tasks, passive leadership tends to be more effective.

Everyone believes that the environment plays an important role in the functioning of the whole organization. So, a manager should work in harmony with the external environment.

The environment is subject to change and the manager should keep himself updated with all the changes like political change, social change, economic change, etc.

It is very important to do so because all the factors of the environment influence the applicability of the leadership.

Question on Contingency Theory of Leadership

Q. Explain the functioning or the working of the Contingency Theory given by Fiedler?

Answer: The ‘Contingency theory’ does not suggest a leader adapt to a situation, rather the goal should match the leader’s style. In order to make this theory effective, it is important to find what style a leader has.

This is done through the method of ‘Least Preferred Coworker Scale (LPC)’. Under LPC, a set of questions are asked by the manager.

This states the type of workers, the manager would like to work with and his leadership style. Then the model scores him according to his answers and analyses his attributes. There can be 2 results: