The British were really cunning! They laid out an excellent strategy to capture India for their own benefits. That is why a lot of people still hold grudges against the English today. Just like you do not like the England Cricket team. Do you? Well, let’s look at the story of how the British managed to take over a vast country like ours. British expansion is a story that you must know!

The British East India Company slowly and gradually expanded its trading activities in India by getting permission from the then ruling powers, the Mughals and the local rulers. By the time the Mughal Empire’s decline started and it fragmented into successor states, the British East India Company developed designs of becoming a political power by the middle of the 18th century.

After making thorough preparations, the British East India Company acquired its foothold firmly in Bengal, Bihar and Orissa. This happened by its victories in both the battles of Plassey (1757) and Buxar (1765). Since then, the British expansion adopted a threefold strategy of ideological, military and colonial administrative apparatus to expand and consolidate the British Indian Empire. 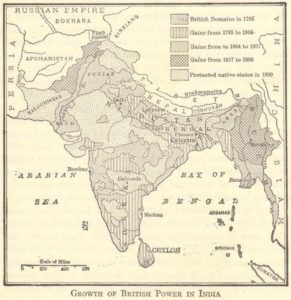 How the British Managed to Gain Political Power?

The British expansion was not just crude blood-thirsty annexationists or conquerors like the Arabs and the Turks. They realized that in order to obtain the optimum profits from Indian trade, they have to secure political power. The British knew what they did was both morally and ethically incorrect.

They justified their action by using ideological bases to brainwash the natives of India and the world. They convinced everyone that their interest in the progress and development of India was a responsibility to civilise India. In this backdrop, let us take up the first aspect of expansion as well as its consolidation of the British expansion, the ideological bases.

By the beginning of the 16th century, we notice the decline of feudalism in Europe along with the emergence of new ideas. These promoted the rise of the nation-state and urged for new geographical discoveries. Further, a new commercial outlook influenced by mercantilist ideas dominated Europe between the 17th and 18th centuries.

Added to these, the growth of science and technology in England made it an industrially developed country. In consequence, England had become a colonial power and a capitalist country. All these developments necessitated England to search for raw materials necessary for the manufacture of goods in England and new markets for their finished mechanized products.

England wanted to achieve these objectives through colonialism in India, as merchants became an influ­ential social class of England. Thus, by the 17th century, the countries of Europe came under the impact of a set of economic ideas and practices called mercan­tilism.

Mercantilism presupposes the volume of world trade as more or less fixed, precious metals silver and gold form the desirable national wealth, balance of trade should be the norm and for that purpose should impose high tariffs on imports.

Orientalism is a concept that stresses the uniqueness of the culture and civili­zation of the Orient. Orientalists are also called Ideologists. Orientalists, who were conservative by nature pleaded for providing a framework of security without interference in the working of the religious-social institutions and cultural tradi­tions. They argued that peace would promote the trade and it would be to Britain’s advantage.

This view of the Orientalists was supported by the right-wing Tories and they also opposed missionary activity of any sort in India. This serious study of the past of India became inevitable as the British expansion authorities decided that it was essential for officers of the British East India Company to be proficient about Indian culture and civilization to rule them properly.

Evangelicalism is a Protestant Christian movement of England of the 18th century. This movement in contrast to the Orthodox Church emphasized on personal experiences, individual reading of gospel rather than the traditions of the established church. While some Christian missionaries attempted to reform the ‘degenerate Indian society’ quietly, the evangelists were openly hostile to ‘Indian barbarism’ and desired to ‘civilize India’.

The influential members of the Evangelicalism were Wilberforce, the confidant of Pitt, Charles Grant, a chairman of the directors and his son who was a cabinet minister. They advocated bringing Christian West to the East and “India will reform herself as a flower to the Sun”. Charles Grant propagated the policy of assimilation of India into the great civilizing mission of Britain. This attitude coincides with the liberalism advocated by Macaulay.

Question: Write a note on the utilitarians.

The most important advocate of utilitarian philosophy was James Mill, the author of History of India published in 1817. His book was studied by the employees of the British East India Company as a Bible. However, it caused immense harm to Indian society by laying the seeds of communalist approach.

They advocated the introduction of reforms into the problem of law and landed property. This could help them attain the Benthamite principle of the ‘greatest good of the greatest number’. They believed that law could be an instrument of change and also through the enactment of laws; Indian society could be transformed into a modern society from that of superstitious society.