A globe is a true model of the earth, in a very compact form. In a globe, there is a needle called the axis that is fixed through the globe in a tilted manner. This axis of the globe passes through two extreme points: known as the Poles (the North Pole and the South Pole). The axis is shown in the form of a needle on the globe. In reality, the earth has no such axis. 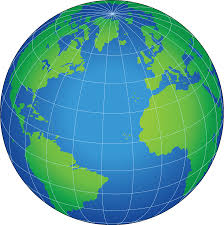 The Equator is the circle passing through the center of the earth. It is perpendicular to the axis and goes on to divide the earth into two Hemispheres, the Northern and the Southern.

There are a number of more circles parallel to the equator. These circles have their centers on the axis and have different radii. Such circles are known as the Parallels of Latitudes. You can identify these parallels using the degrees. On the equator, the latitude is zero degrees.

There is a circle which passes through the Greenwich in Britain. It is perpendicular to the equator, and parallel to the axis. It is known as the Prime Meridian. Prime Meridian divides the earth into two Hemispheres, the Eastern and the Western.

Together, the Equator and the Prime Meridian divide the earth into four equal parts. There are a number of more circles parallel to the Prime Meridian. These have their center at the center of the earth and have equal radii. Such circles are known as the Degrees of Longitudes.

Importance of Latitudes and Longitudes

Two points on earth can lie at the same latitude but still be far away from each other. Also, two distant points may lie on the same longitude. But only one point lies on a particular pair of latitude and longitude. So latitudes and longitudes are helpful in locating a point on earth. Ans. The sun does not shine When it is 12 noon at a time, it means that the sun is not at all visible at the place on the other side of the earth. So it must be midnight there. In fact, we can say that the time difference is 24 hours at 360 degrees longitudes apart. So every longitude brings a difference of 4 minutes. This gives us the concept of Time Zones. Two consecutive time zones differ by an hour. The time at a particular place is said to be the local time.