In view of the coronavirus pandemic, we are making LIVE CLASSES and VIDEO CLASSES completely FREE to prevent interruption in studies
Geography > Our Changing Earth > Asthenosphere & the Lithosphere – Definition and Properties

Asthenosphere and Lithosphere constitute the outmost concentric layers of our earth. As we know, earth has many layers. They are mainly divided into four layers. The centre one being the inner core, then we have the outer core. Further, there is the mantle above it and finally the crust.

Asthenosphere encompasses much of the upper mantle of the earth. Then, the lithosphere comprises the uppermost mantle as well as the overlying crust. Thus, we see both of these things comprise of different things.

The rocks found in this zone which are mostly peridotite are quite solid in structure. However, as it remains in such pressure, that enables it to flow away similar to tar in plastic fashion at the rate of possibly an inch or two per year. The mechanical weakness of this zone thus describes its name which translates to ‘weak layer’. 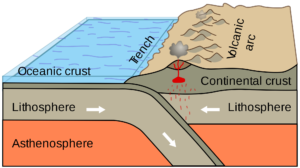 Furthermore, convection currents generate within the asthenosphere, which pushes the magma upwards through the volcanic vents and spreads centres to create a new crust. These currents also stress the above layer which is the lithosphere. It’s cracking also causes earthquakes sometimes.

The lithosphere is the outer layer of the earth which is rocky and rigid in structure. It comprises of the very top of the mantle which lies above the asthenosphere plus the overlying crust. It is true that this layer extends to almost 100 km of depth.

When we compare it to the hot and liquid asthenosphere, we see that it is quite cool and rigid Moreover, instead of being a solid coating it is broken. In other words, it is found in almost a dozen separate, rigid blocks or tectonic plates.

The crust of lithosphere divides into two categories which are oceanic crust and continental crust. The former is comparatively thin plus dense whereas the latter is lighter and thicker.

Basaltic rocks which are rich in silica and magnesium dominate the oceanic crust. Similarly, continental crust is made of granitic rocks dominated by silica and aluminium.

The physical properties of the asthenosphere and lithosphere have helped in creating the central forces which move and shape the structures that combine the earth’s surface. All this is present in the plate tectonics theory.

As the asthenosphere is hot and flowing, it is so because of the convection of heath from the innards of the earth. This offers quite a lubricating layer which allows the rigid plates of the lithosphere to slide easily.

Further, new basaltic oceanic crust forms due to the diverging of tectonic plates in the asthenosphere. It happens because of the rise of magma from it to the surface at mid-ocean ridges. Eventually, the fresh crust which has formed keeps spreading from either side and then cools down and turns denser as it moves away from the ridge of the mid-ocean.

Whenever an oceanic plate is colliding with a less-dense plate (it could be either younger oceanic crust or continental crust), it dives beneath it which causes the mantle to basically recycle.

Question– Which of the following layers means a weak layer?

Answer– The correct answer is option B. It derives from the Greek language.