A vertex is a mathematical word which refers to a corner. Most geometrical shapes contain vertices. Students can learn more about vertex here.

A vertex in geometry refers to a point where two or more lines, curves, or edges meet. Therefore, vertices are points where two lines meet to create an angel. Furthermore, the corners of polygons and polyhedral are also vertices.

Most two or three-dimensional geometrical shapes happen to possess vertices. For example, a square has four corners, which are its four vertices. Moreover, vertices can also refer to a graphical representation of an equation. 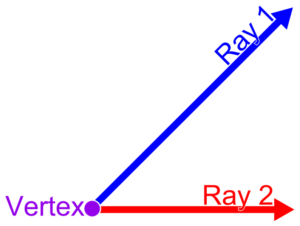 Vertices of Line Segments and Angles

When two line segments intersect, the point of the meeting of the two lines is a vertex. This is true, regardless of whether the lines cross or meet at the corner. Therefore, the angles also have vertices.

Angle measures the relationship of the two-line segments. Furthermore, these are called as rays and they meet at a specific point. So, on the basis of the above definition, one can notice that this point is also a vertex.

A two-dimensional shape certainly consists of two shapes. Furthermore, these two parts are edges and vertices.

Moreover, the edges refer to the lines that are the boundary of the shape. Also, each point where the intersection of two straight lines takes place is a vertex.

A triangle certainly has three edges. Moreover, a triangle also has three vertices. Most noteworthy, these vertices are a corner where two edges meet.

There are some two-dimensional shapes which do not contain any vertices. Good examples can be circles and ovals which are created from a single edge and have no corners. These shapes have no vertices because there are no separate edges intersecting.

Consider a cube for example; its every flat side is called a face. Also, each line where the meeting of two faces takes place is an edge.

Each point where the meeting of two or more edges takes place is called a vertex. A cube certainly has six square faces.

Moreover, it has twelve straight edges and eight vertices. In short, each of the corners of a cube is a vertex. Some three- dimensional figures like spheres don’t have vertices because they lack intersecting edges.

The Vertex of a Parabola

Vertices have significant usage in algebra. A parabola refers to a graph of an equation which looks like the letter “U”. Most noteworthy, the equations which produce parabolas are the quadratic equations. The formula is:

A polygon vertex xi of a simple polygon P refers to a principal polygon vertex. This is the case, if the diagonal [x(i − 1), x(i + 1)] intersects the boundary of P only at x(i − 1) and x(i + 1). There are certainly two types of principal vertices: ears and mouth.

Ears- A principal vertex xi of a simple polygon P is known as an ear in case the diagonal [x(i − 1), x(i + 1)] that bridges xi lies entirely in P. Furthermore, every simple polygon has at least two ears according to the two ears theorem.

Mouths- A principal vertex xi of a simple polygon P is a mouth if the diagonal [x(i − 1), x(i + 1)] happens to exist outside the boundary of P.

Q1 Which of the following statements is true with regards to the Vertices?

A. A triangle also has two vertices
B. It refers to a point where two or more lines, curves, or edges meet
C. Some two-dimensional shapes which do not contain any vertices
D. The corners of polygons and polyhedral are also vertices

A1 The correct option is A., which is “a triangle also has two vertices”. This is because a triangle has three vertices instead of two.