The liability of doing any wrongful act on behalf of another person is based on the concept of respondeat superior. Also, this means that the superior should be let liable. Some of the examples of relationship where vicarious liability may arise are principal-agent, master-servant, etc. 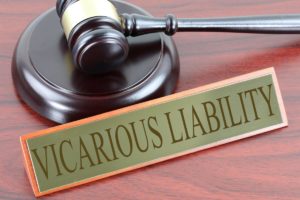 In this case, the general rule is that the master is liable for all sorts of acts that are authorized by him. Also, it is included that the acts are done by the servant at the time of his/her employment.

While a servant is someone who is employed to do the work under the controls of the master and his direction. So, the important thing here to note is that the master is also not liable for the acts that are done by the independent contractor.

For example, the driver you hire is your servant. You can give me advice as to how to drive the car and give him directions. While the taxi driver in this scenario will be the independent contractor. Thus, you can only tell the direction to the taxi driver but you cannot order him.

Learn the rule of strict liability here in detail.

Furthermore, to test the difference between an independent contractor and a servant there are two tests. These tests are hired and fire test and direction and control test. In the hire and fire test, you can whether someone is your employee or not by knowing whether that person can be fired or not.

Also, ask whether that person receive the salary in the form of remuneration? If the answer to both the questions is yes then that person is your employee. Although this test alone cannot be a detrimental factor to decide anything. The other test that you have to do is direction and control test.

In this test, check whether the person that needs to do the job receives the direction regarding the direction from his master? If the answer is yes then that person is a servant.

So, you can see that both the test needs to satisfied to find out whether the person is an independent contractor or a servant.

Principal, in this case, is a person who authorizes someone to act on his/her behalf. While the other who is advised to act accordingly is called as the agent. It is always stated that the principal is stated liable for any act by his agent. It is important that the act is authorized by the principal for him to be held liable. The authority that principal acts can be in the form of implication or expressed.

Q. Here are some of the facts given in the case. A gives some amount of cash at his place to B. B here is the neighbor of A and is also one of cashier in the bank. This is the same bank where A deposits the money. Instead of doing the needful, B misplaces the money. In this case, what correct legal position will be given?

A. As B is the employee of the bank, the bank will be held liable.

B. The bank should not be liable as B did not do anything wrong.

C. The bank will not be held liable as B did not do anything wrong during the course of the employment.

D. As B was the employee of the bank, the bank would be vicariously liable in this case.

Answer: C. The bank will not be held liable as B did not do anything wrong during the course of the employment.