Some activities may be so dangerous that the law has to regulate them with extreme consequences. For example, the law may sometimes levy a penalty even if damage occurs without somebody’s fault. This is exactly what happens under the rule of strict liability. This rule is very important for commercial and other activities that have the potential to result in horrific damages. 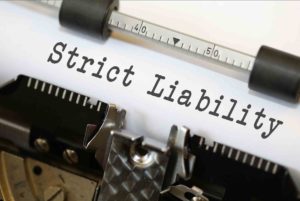 The strict liability principle is an extremely important concept under the law of torts. The basis of this principle basically lies in the inherent harm that some activities can inflict. For example, leaking of poisonous gasses, as it happened in the Bhopal Gas Tragedy, will attract this rule.

The underlying principle of compensation in torts generally depends on the extent of precautions a person takes. Hence, if he takes abundant precautions to prevent some harm, the law may exempt him from paying damages. This principle, however, does not apply to strict liability.

Under the strict liability rule, the law makes people pay compensation for damages even if they are not at fault. In other words, people have to pay compensation to victims even if they took all the necessary precautions. In fact, permissions allowing such activities often include this principle as a pre-condition.

The rule of strict liability originates from the famous English case of Rylands v. Fletcher. According to the facts of this case, the defendant owned a mill and wanted to improve its water supply. For this purpose, he employed a firm of reputed engineers to construct a reservoir nearby.

The problem occurred when the reservoir was so full one day that the water from it started over-flowing. The water flowed with so much force that it entered the plaintiff’s mine and damaged everything.

The engineers, who were independent contractors of the defendant, were clearly at fault. This is because they were negligent in constructing the reservoir. This is exactly what the defendant also said for avoiding his liability.

The court, however, disagreed and explained the strict liability rule. It said that when somebody keeps something on his property for his benefit, it should not escape and affect others. In case it so escapes, the owner of that thing must compensate the victim even if he was not negligent.

The strict liability rule does not apply in cases involving the following exceptions:

An act of God is a sudden, direct and irresistible act of nature that nobody can reasonably prepare for. It can cause damage regardless of how many precautions one may take. For example, tsunamis, tornadoes, earthquakes, extraordinary rainfall, etc. are acts of God. Any damage that occurs due to these acts does not attract strict liability.

2) Wrongful act of a third party

Sometimes, the involvement of third parties may be the cause of damages. For example, renovation work in one flat may cause some nuisance to another flat. Here, the tenant affected by the nuisance cannot sue his landlord. He can only sue the person renovating the other flat.

In several instances, the plaintiff may himself be at fault for the damage he suffers. In such cases, he cannot shift liability on some other person regardless of how much he suffers.

The Supreme Court applied a stricter version of the rule of strict liability in the case of MC Mehta v. Union of India (1987). In this case, harmful Oleum gas had escaped from a factory owned by Shriram Foods & Fertilizer Industries. The gas had caused a lot of damage to people and industries nearby.

The Supreme Court held that, despite being so stringent, the strict liability rule was inadequate in modern times. This is because scientific advancements have made modern industries even more dangerous and hazardous. Hence, the court laid down the absolute liability rule in this case.

According to the absolute liability rule, no exceptions of strict liability shall apply in certain cases. Therefore, the people who cause damage will have unlimited liability to compensate victims adequately. Courts in India have applied this rule in many cases to create deterrence.

Questions on Rule of Strict Liability

Question: Fill in the following blanks.