Table of content
1 What is a Radian?
1.1 Definition of Radian
1.2 Formula of Radian
1.3 Example of Radian
1.4 Advantages of Measuring in Radians
1.5 Dimensional Analysis
1.6 Use in Physics
1.7 Solved Question For You

What is a Radian? 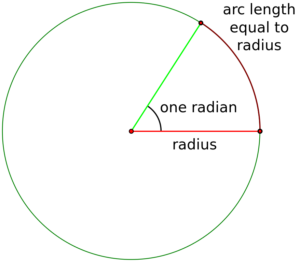 The radian is an SI unit that helps in the measurement of the angles. Moreover, it is also the standard unit for angular measurement that we use in various areas of mathematics. The unit circle’s length of an arc is number wise equal to the measurement in radians of the angle that it subtends.

A single radian is just below 57.3 degrees that expands at OEIS: A072097. However, the unit was formerly an SI unit by the supplement. Since 1995 the radian is an SI derived unit.

Separately, the SI unit of the solid angle measurement is steradian. Moreover, the radian is most usually represents itself by the symbol rad. Its alternative symbol is C. The superscript letter c, the letter r, or a superscript R.

As a ratio of the 2 lengths, a radian is a pure number that requires no unit symbol. In mechanical writing, the symbol rad is almost omitted every time. However, when quantifying an angle in the absence of some angle, the radians are set on an assumption. When the degrees are meant then the symbol ° is used.

Advantages of Measuring in Radians

In calculus and most of the other branches of the mathematics beyond the practical geometry. The angles are measurable in radians. Moreover, it happens because radians consist of a mathematical naturalness that results in a more elegant formulation of a number of important outcomes.

Most notably, results in an analysis that involves trigonometry also are expressed in radians. For example, the use of radians results in the most simple limit formula.

Which is the basis of many other identities in mathematics that also includes:

Although the radian is a unit for measurement. It is a dimensionless quantity. This is visible from the definition given earlier above. The angle subtended at the center of the circle, measured in radians. This angle is equal to the ratio of the length of the enclosed arc to the length of the radius of the circle