Table of content
1 Suggested Videos
2 What is a Chord?
2.1 Download Arc of a Circle Cheat Sheet PDF
3 Chord of a Circle Theorems
3.1 Browse more Topics under Circles
4 Solved Example For You

What is a Chord?

Chord of a Circle Theorems 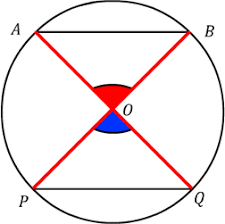 2. Theorem 2: This is the converse of the previous theorem. It implies that if two chords subtend equal angles at the center, they are equal.

3. Theorem 3: A perpendicular dropped from the center of the circle to a chord bisects it. It means that both the halves of the chords are equal in length. 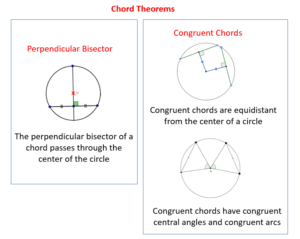 5. Theorem 5: If there are three non-collinear points, then there is just one circle that can pass through them.

6. Theorem 6: Equal chords of a circle are equidistant from the center of a circle.

7. Theorem 7: This is the converse of the previous theorem. It states that chords equidistant from the center of a circle are equal in length.

8. Theorem 8: The angle subtended by an arc at the center of a circle is double that of the angle that the arc subtends at any other given point on the circle.

9. Theorem 9: Angles formed in the same segment of a circle are always equal in measure.

10. Theorem 10: If the line segment joining any two points subtends equal angles at two other points that are on the same side, they are concyclic. This means that they all lie on the same circle.

These are some of the basic theorems on the chords and arcs of a circle. We will read about some other theorems in the next chapter. Let us look at some solved examples based on these theorems.

Question 1: In the following diagram, calculate the measure of ∠POQ when the value of ∠PRQ is given 620.

Answer : According to the theorem of chords of a circle, the angle subtended at the center of the circle by an arc is twice the angle subtended by it at any other point on the circumference. Hence, ∠POQ is equal to two times of ∠PRQ. Therefore, ∠POQ = 2 x ∠PRQ

Question 2: What is a Chord?

Question 3: How do you find the radius of a circle with a chord?

Question 4: Can a diameter be a chord?

Answer: A chord of a circle refers to a straight line segment whose endpoints both lie on the circle. Similarly, a chord that is passing through a circle’s centre point will be the diameter of the circle. Every diameter is a chord, however not every chord can be a diameter.

Question 5: What is the arc of a circle?

Answer: The arc of a circle refers to a portion of the circumference of a circle. The formula for finding out the arc length in radians has r as the radius of the circle and θ as the measure of the central angle in radians.