Introduction to Radius of Curvature

The curvature is something that relates to the geometry Also, it is a scalar quantity. That one may also define as curvature vector. Besides, in this topic, we will discuss what is curvature and radius of curvature? 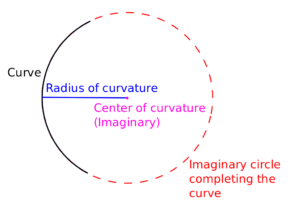 According to mathematics curvature is any of the number loosely related concepts in different areas of geometry. Naturally, it is the amount by which geometric surfaces derivate themselves from being flat plane and also from a curve being straight like a line. However, it is defined differently for a different context.

Formula of the Radius of Curvature

Normally the formula of curvature is as:

Application of Radius of Curvature

Also, it can help to find the radius of curvature of the earth along a course at an azimuth.

Besides, the radius of curvature also uses three parts equation for bending of beams.

Moreover, it has a specific meaning and a sign convention in optical design. Also, spherical lenses have a center of curvature.

Difference Between Radius and Radius of Curvature

Radius refers to the distance between the center of a circle or any other point on the circumference of the circle and surface of the sphere. While on the other hand, the radius of curvature is the radius of the circle that touches the curve at a given point. Also, it has the same tangent and curvature at that point.

Moreover, the radius is of a real figure or shape whereas the radius of curvature is an imaginary circle.

It a curvature that is a submanifold of a manifold that depends on its particular inserting. Besides, its examples include the torsion of curves in three-space and the curvature. Also, it includes the mean curvature of surfaces in three-space.

It is also a curvature such as Gaussian curvature that is detectable to 2-D (two dimensional) the “populations” of a surface and not just outside observers. Also, they cannot study 3-D (three dimensional).

Question. What is the curvature of the earth?

Answer. The correct answer is option A because the curvature of the earth is 7.98 inch.