Do you ever leave anything to ‘chance’? Like perhaps leave out a chapter from your revision because it ‘probably’ won’t come in an exam? These terms ‘chance’ and ‘probability‘ can actually be expressed in mathematical terms. Come let us take a closer look at probability and the probability formula. 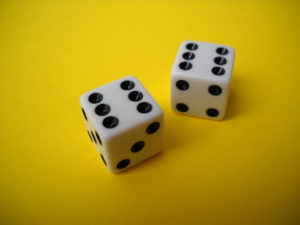 Let us explain both these concepts with an example. You have gathered your friends to come and play a friendly board game. It is your turn to roll the dice. You really need a six to win the whole game. Is there any way to guarantee that you will roll a six? Of course, there isn’t. What are the chances you will roll a six?

Well if you apply the basic logic you will realize you have a one in six chance of rolling a six. Now based on the above example let us look at some concepts of probability.

A process which results in some well-defined outcome is known as an experiment. Here you rolling the dice was the random experiment, since the outcome was not sure. The outcome here is 1, 2, 3, 4, 5, or 6. It cannot be predicted in advance, making the rolling of dice a random experiment.

All possible outcomes or results of an experiment make up its sample space. So the sample space of the above example will be, S = { 1,,2,3,4,5,6}. Since a dice once thrown can give you only one of these six results.

When a particular event occurs, like for example the dice lands on a six, we can say an event has occurred. So we can say every possible outcome of a random experiment is an event.

Let us now change our example. Say you are now tossing an ordinary coin. Every time you toss it either land on heads or on tails. Every time the coin gets tossed there is a 50% chance of heads and 50% chance of tails. Both events are equally likely, i.e. they have an equal chance of happening. This is what we call Equally likely events.

Occurrence of an Event

A particular event will be said to occur if this event E is a part of the Sample space S, and such an event E actually happens. So in the above experiment, if you actually roll a six, the event will have occurred.

Now that we have seen the concepts related to probability, let us see how it is actually calculated. To see what are the chances that an event will occur is what probability is. Now it is important to remember that we can only calculate mathematical probability of a random experiment. The equation of probability is as follows:

Question 1: Toss a fair coin 3 times in a row, how many elements are in the sample space?

Question 2: A die is thrown once. The probability of getting a number greater than 3 is ___?

Question 3: What meant by simple probability?

Question 5: What is the purpose or importance of probability?

Answer: Purpose of probability is finding out the percentage of the possibility of occurrence of an event.  Probability allows us to make a prediction of happening. It allows us to get a rough idea regarding the happening of an outcome.

Question 6: How can one calculate simple probability?