In earlier classes, we defined the potential energy of an object as the energy by virtue of its height. However, here we shall see that this energy can also be a result of an objects configuration or its relative position inside a field. The concept of potential energy is basic to many branches of physics, let’s learn more!

Potential energy is basically that form of energy that’s stored in an object due to its position in comparison to a certain zero position. For example, a rock on the top of a hill has a stored energy in it. This energy is relative to its peak position that takes its form when thrown from that height. Similarly, huge ball in the demolition machine has energy stored in it when held at an elevation. 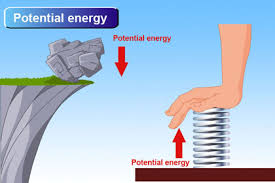 As the name signifies, every object that behaves like an elastic or spring is a source of elastic potential energy. The best examples are rubber bands, springs etc. These elastic objects follow the Hooke’s Law. The stretching and compressing of elastic items lead to storage of energy in the form of Elastic Potential energy.

Compression of a spring requires force, the more the compression the greater is the force. This implies that amount of force is directly relative to the amount of compression or stretch(x). The constant of proportionality here can be termed as spring constant (k). Therefore, F = k×x.

The greater the mass the greater will be the gravitational potential energy. Similar is the case with height, an object at a higher elevation will have greater gravitational energy stored in it.

An Instance of the Gravitational Potential Energy

Suppose an object of mass M is lying at point A on the surface of the earth.  g here is the acceleration due to gravity on Earth’s surface and the force of attraction towards the center of the Earth is M*g, which equals the weight of the object. Now, If we have to move the object to B, from point A then the force that equals M*g has to be applied in the upward direction.

Now, if the object moves upwards to height (h) then the gravitational force (F)  acting on the object is negative of P.E. So here when an object moves away from the surface we get, F = -d/dh (V) = -mg

The negative sign here denotes that as the object is moving upwards, the gravitational force is pulling it downwards. The kinematic relation here comes into play and is denoted by the change in speed when the object falls back to the ground. Here the speed of this falling object increases. Hence, v2 = 2 gh or (1/2) mv2 = mgh

Energy as a Negative Constraint

But this energy by virtue of heigh becomes a positive constraint as soon as the object reverts to the ground. Potential energy  (V) further, for a force F (x)  is:

The potential energy stored in an object has dimensions ML2T-2  and the unit here is Joule or J. This is similar to Kinetic energy or work and the change in Potential energy with respect to the conservative force acting on it is the negative of the total work done by that force. Therefore, Δ V = -F(x)Δx

Q: A body is falling from a height h. After it has fallen a height h/2, it will possess