Hey guys! Do you know the meaning of bandwidth? And how electromagnetic waves travel through different mediums? In this discussion, we will understand the concept of bandwidth and what are its applications in both transmission and communication.

We all know that most signals are transmitted in terms of electromagnetic or radio waves. As we have come across in the discussions on the topics of Amplitude Modulation and Frequency Modulation, the original signal is superimposed on a carrier signal or changes its frequency to carry the information from the sender to the receiver where it is demodulated and converted back into the original signal.

Every signal is composed of a large number of wavelengths of different frequencies and this signal is unique in terms of its composition. This brings us to the methods employed in the process of identification of the signal. This is where the concept of Bandwidth comes into the picture. So, what is Bandwidth of a signal? 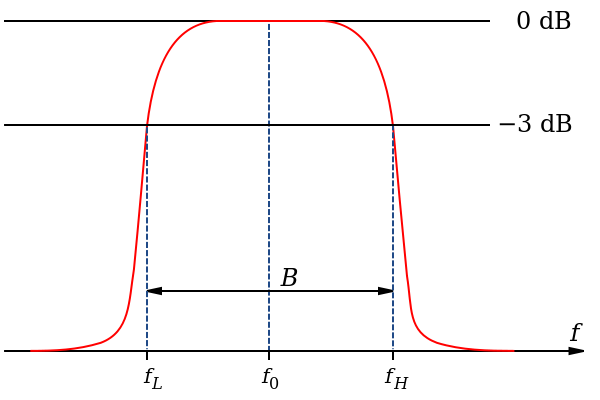 The bandwidth of a signal is defined as the difference between the upper and lower frequencies of a signal generated. As seen from the above representation, Bandwidth (B) of the signal is equal to the difference between the higher or upper-frequency (fH) and the lower frequency (fL). It is measured in terms of Hertz(Hz) i.e. the unit of frequency.

Neither do all the channel occupy all the frequencies nor is there no channel at every frequency, but every channel has its own unique frequency like an  ID.

Given above is a diagram representing various bandwidths of electromagnetic waves and it goes a long way in helping identify the type of wave on basis of its frequency and thus determining its applications. Thus we see that bandwidths exist for all kinds of waves in both the visual and audio spectrums and well beyond them as well.

Medical uses of sound signals with a frequency of more than 20000Hz is done to determine the health and condition of internal organs or during a pregnancy to determine the growth of a foetus.

An acronym for “Radio Detection And Ranging”; RADAR uses sounds of very high frequencies typically of the order of 1 to 3 MHz and is used in applications related to space, defense, engineering, metal studies etc.

Thus we have studied the concept of Bandwidth of a signal and determined its applications and limitations. Sound knowledge of the concepts discussed here will help the reader in understanding the various complexities and operational requirements of the real-life systems.