Hello everyone! We have seen the modulation definition and studied the types of modulation. In this discussion, we will study methods to produce an amplitude modulated wave. We know that any signal that is generated from a source and needs to be sent over large distances from the source to the receiver, needs to be modified. This can be done by superimposition with a carrier signal to ensure the signal can be transmitted in a suitable bandwidth. Let us study this in detail.

Following are the methods for modulating the waves:

In this discussion of amplitude modulation definition, we will study the methods employed to generate an Amplitude Modulated signal, its uses, and applications.

Amplitude Modulation is one of the oldest and most commonly utilized methods for transmission of a signal. It is, in fact, the earliest methods employed. It has been responsible for the development of modern communication systems from their humble origins to such a robust network as we see in the modern world.

The concept of amplitude modulation is also responsible for the development of radio communication over large distances. To understand the concept of modulation in detail let us revise the basic features of a sinusoidal wave.

The basic features of a sinusoidal wave are as follows:

During this discussion for the purpose of easy understanding, we assume a waveform generated in the form of a Sinusoidal wave. This does not mean that waveforms other than the one under observations do not exist. The reader is advised to seek guidance on any such concept beyond the scope of this discussion. A sinusoidal waveform is :

Here, A= Amplitude of the wave; ω= Angular frequency;  t= time period or instant; the Φ=Phase difference. For the purpose of simplicity, we shall assume the phase difference to be zero. This reduces the  displacement of any point ‘X’ on the waveform as

Let us assume our base or message signal to be generated as specified above. To produce an amplitude modulated wave we need to superimpose this signal with another signal of higher frequency. This signal is the ‘Carrier Signal’ and differs from one carrier to another.

For example, A radio signal has a particular carrier signal different from that of a TV signal and so on. Let us assume this carrier signal to be represented as :

Thus the carrier signal has a different Amplitude and Frequency as compared to the message signal. Both these signals superimpose with each other. To perform this function we use simple triode to superimpose these signals. 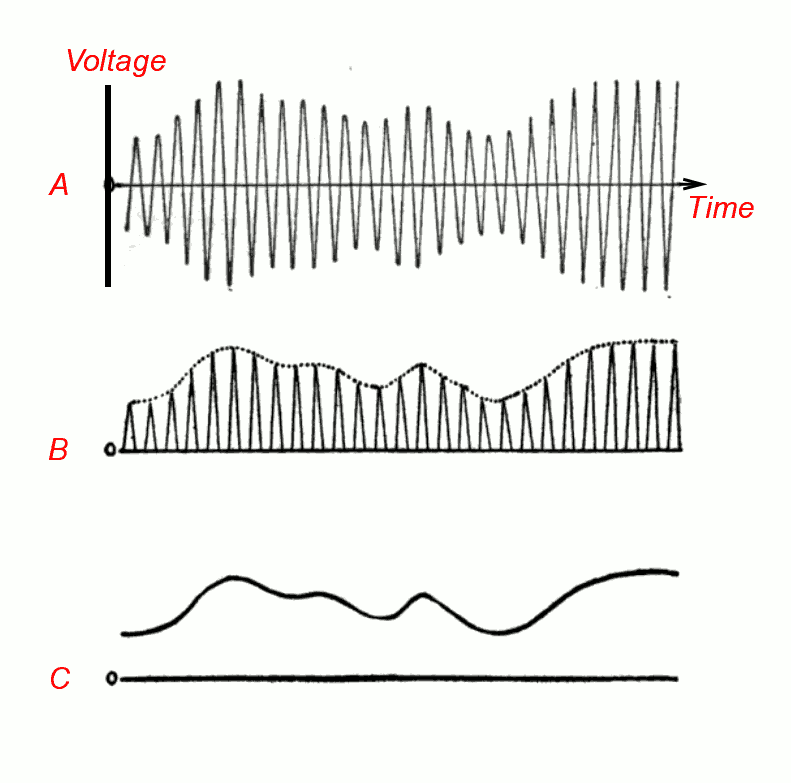 As shown in the above figure, the message signal ‘c’ and the carrier signal ‘A’ are superimposed to give the modulated signal ‘B’ as shown. But the signal ‘B’ which is obtained is in only one phase. To overcome this problem we use a square law device placed in the circuit to square the waveform generated. The square law device is a non-linear device, the output for which can be understood better with the diagram given below.

Yet, the process is incomplete. The modulated signal generated is quite weak and cannot sustain attenuation over a large distance. This demands to strengthen the signal. We get this by amplification of the signal using an amplifier diode. The quality of the signal does not change only its strength increases by the amplifier which forms the second last part of the circuit.

Finally, the amplified and modulated signal goes to a transmitter or antenna for radiation at a particular bandwidth frequency. This antenna transmits the signal over large distances using radiation. But this alone does not ensure the signal will reach its destination.

We repeat the signal using repeaters at regular intervals to reduce attenuation and noise.

Image shows a typical Amplitude Modulation Circuit used normally. Thus we have seen the various processes involved in the production of an amplitude modulated wave.

Answer: C. The carrier frequency is given by

This conculdes our discussion on the ampliltude modulation definition and its production.