An electroscope is a scientific tool which helps in detecting the presence of an electric charge on a body. The first electroscope was a pivoted needle electroscope invented in the year 1600 by a British physicist William Gilbert, known as vesorium. 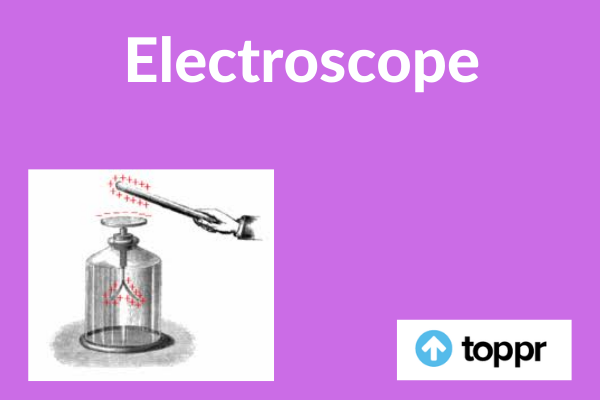 The basic theory behind a working electroscope depends on the atomic arrangements of elements, the induction of the charge, the internal structure of metal elements and the basic idea of unlike charges which attract each other while like charges repel each other.

The electroscope consists of a metal detector knob on the top, which is attached to a pair of metal leaves hanging from the bottom of the connecting rod. When there is no charge, the metal leaves loosely project downwards. But, when a charged object held close to an electroscope, one of the two things are possible.

In both cases, the electrons return to their original state as soon as the charged body withdraws.

Moreover, the electroscope cannot evaluate whether the charge is positive or negative, but it only indicates the presence of the charge in a body.

The two types of classic electroscopes that are still in use in the field of physics, help in explaining the concept of electrostatics are the pith-ball and the gold-leaf electroscopes.

It was invented by the British physicist and schoolmaster John Canton in 1754. It consists of one or two mini lightweight balls of non-conductive material, hung from the hook of an enclosed stand by the help of silk or linen thread.

It was invented by British physicist Abraham Bennet, in the year 1787 as a bit more sensitive tool compared to the Pith-ball electroscope.

The Gold-leaf electroscope serves to detect the electrical charge present in the body and to classify its polarity. Its works on the theory of electrostatic induction and repulsion. It consists of a single brass rod to which two slender gold leaves are attached to one end and metal disc at another end.

The two thin leaves and an electrically conductive material are hanged parallel to each other and practically in contact with each other. The rod is placed inside the cylindrical glass jar so that the gold leaves stay inside and disc lies outside. The lower portion consists of a tin foil and, a small amount of CaCl2 is placed inside the gold-leaf electroscope to keep the air inside the jar dry.

Since the leaves are fragile and sensitive, they don’t have any stiffness, and they hang timidly. When they charge, they divide and form an angle which depends on the amount of the impact on the leaves that determines the charge voltage. This electroscope only shows the potential, not the charge. Also, the voltage is measurable by studying the angle of separation.

The various benefits of an electroscope are:

Q.1. Which kind of electroscope is the most common and what is its application?

Answer: Gold leaf type of electroscope is most commonly in use. It helps to detect and measure the static electricity and voltage. It has several applications such as –

The test material is taken and touched on a metal cap. If the leaves diverge, it represents the body as charged, and if there is no impact on the leaves, then the material is uncharged.

A body charges the electroscope (say, positively charged body) and then the body is extracted. Next, the testing material makes contact with the metal cap. The body has the same charge(positive) if the leaves diverge more. If the leaves come closer, then it represents that the bodies are opposite charged(negative).

Answer. There are several differences between these two varieties of the electroscope. These are:

Q.3. What is the name of the first electroscope?

Answer. The first-ever invented electroscope was a pivoted needle electroscope called vesorium. It was invented in the year 1600 by a British physicist William Gilbert.