The Joule Thomson effect refers to a thermodynamic process that occurs when the expansion of fluid takes place from high pressure to low pressure at constant enthalpy. Furthermore, the approximation of such process takes place in the real world by facilitating an expansion of fluid from high pressure to low pressure across a valve. Also, the Joule-Thomson effect and inversion temperature is dependent on the gas’s pressure before expansion 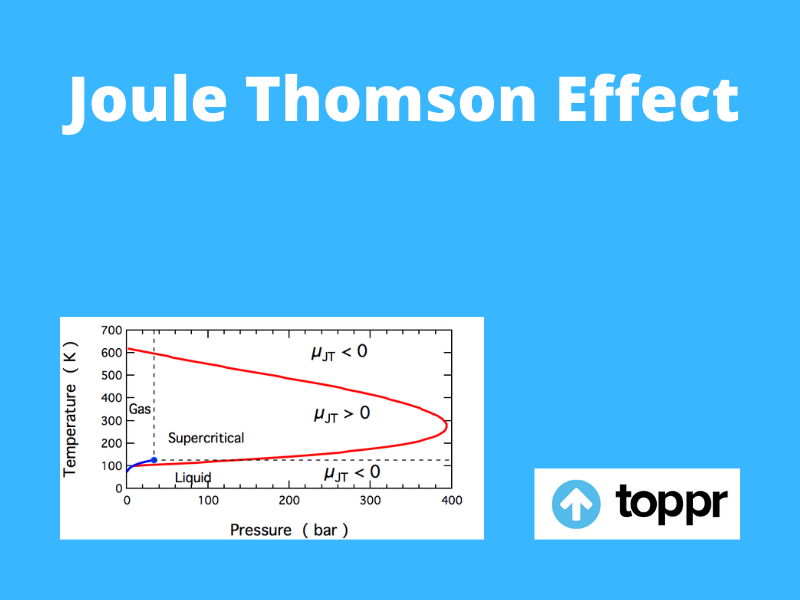 How do we Measure the Joule Thomson Effect?

The adiabatic (no heat exchanged) expansion of a gas can take place in a number of ways, as part of the Joule-Thomson effect experiment. The change in temperature which a gas experiences during expansion is dependent not only on the initial pressure and final pressure but also on the manner the expansion takes place.

If the expansion process is reversible, such that the gas would be always in thermodynamic equilibrium, the expansion is isentropic. Here, the temperature of the gas decreases and it does positive work during the expansion.

The Joule–Thomson expansion refers to a method of expansion in which a gas or liquid at pressure P1, without a considerable change in kinetic energy, flows into a region of lower pressure P2. The expansion is certainly inherently irreversible.

During such an expansion, there would be no change in enthalpy. Furthermore, the determination of whether the internal energy increases or decreases takes place by whether work is done by the liquid or on the fluid. This means that it is determined by the initial and final states of the fluid’s properties.

At temperatures that are below the gas-liquid coexistence curve, the condensation of N2 takes place to form a liquid. Moreover, the coefficient would once again become negative. Thus, for N2 gas below 621 K, a Joule–Thomson expansion can be used to cool the gas until the formation of liquid N2 takes place.

The Joule Thomson effect formula is below

For a gas temperature that is above the inversion temperature, the μJT would be negative. The ∂P shall be always negative in this case, which means that the ∂ must be positive. Consequently, the warming of the gas will take place.

Derivation of the Formula of Joule Thomson Effect

First is the throttling process. Here, the enthalpy must be constant partially because only local conditions must be considered.

Consider the pushing of the fluid taking place by a piston. This exerts a pressure Pi, while a need for a second piston arises to enable the fluid to pass through. The second piston will have the pressure Pf, to facilitate backward movement.

Vi is the initial volume while Vf is the final volume.

Assume that no heat flow takes place, so energy change is

Take Wleft – to be positive and Wright as negative. Therefore, the change in energy is

Rearranging this will provide

or Hf = Hi so enthalpy is constant during the throttling process, so ∂H = 0

It is certainly difficult to think what is the physical representation of the Joule–Thomson coefficient, μJT. Also, modern determinations of μJT avoid the original method that was used by Joule and Thomson. Rather, measurements take place with a different, closely related quantity.

There are three variables T, P, and H that the Joule–Thomson coefficient involves. Moreover, one can obtain a useful result immediately by applying the cyclic rule. Furthermore, one may write the rule in terms of these three variables as

Each of the three partial derivatives in this expression would carry a specific meaning. The first is μJT, while the second is the constant pressure heat capacity, Cp

and the third partial derivative is the inverse of the isothermal Joule–Thomson coefficient, μT

Answer 1: The Joule Thomson effect is simply a thermodynamic process. Furthermore, this process happens when the expansion of fluid takes place from high to low pressure at constant enthalpy.

Question 2: What are the factors on which the change in temperature is experienced by gas during expansion?

Answer 2: The factors on which the change in temperature which a gas experiences during expansion are initial pressure, final pressure, and the manner in which the expansion is carried out.