Discovery and invention work hand in hand. Inventions are an integration of things, which have already discovered, and with the help of inventions, we make new discoveries. Discovery is the act of searching and exploring something, which was already existed but was never recognized. On the other hand, the creation or designing of an item or a process that has never been existed before, with its own ideas and developments is known as an invention. The difference between Discovery and Invention can help us to understand the basics better and know their comparisons thoroughly. Let us now understand what is the difference between Discovery and Invention.

We can define discovery as the recognition of something that already exists as something new. Discoveries usually occur when we find something for the first time ever.

What is an Invention?

Difference between Discovery and Invention 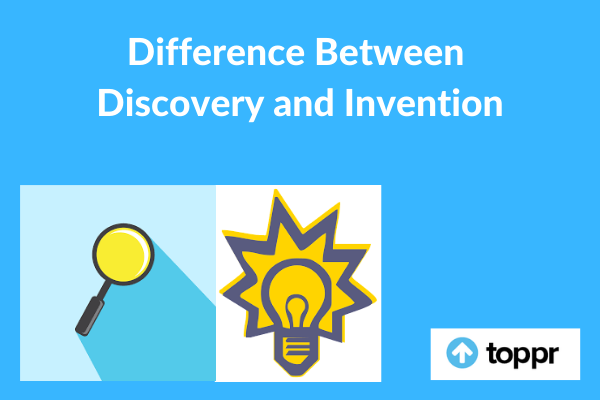 Difference between Discovery and Invention

The important difference between Discovery and Invention

The term discovery denotes the act of detecting or uncovering something for the very first time, which is already there in the world, but previously we cannot recognize it as relevant. It is the scrutiny of new events, actions, phenomena, or reasoning. The discovery relies on ideas, collaborations, and former discoveries.

When we talk about discovery two things play an important role they are questioning and curiosity. These two lead to the discovery of things, which we do not acknowledge earlier, which in turn results in the invention of processes, products, and methods. There are some important discoveries, which came out as a profound development in knowledge and technology.

Discoveries are the first description of natural law or a law derived from natural laws. Because of the discovery, nothing has changed apart from an associated increase in knowledge.  Examples of Discovery of America by Columbus, Discovery of gravity by Isaac Newton, Discovery of plant cell by Robert Hooke.

The creative achievements, which allow for previously unknown solutions and applications in the area of technology is termed as an invention. In other words, an invention is a novel and non-obvious method, device, process, improvement, or technique. The cultural invention is another meaning of the invention, which is an innovative set of useful social behaviors adopted by people and passed on to others.

They are either man-made or scientific occurrences of objects that exist due to the willpower and creation of human beings. Sometimes individual works alone on an idea to invent something new, or sometimes a group of scientists work together to invent something useful. It can also be developed by a person, on which other persons make additions or improve it further. It plays a crucial role, in transforming the way people do their work. Its creator can patent an invention.

FAQs about Discovery and Invention

Answer: A Patent is a statutory right for an invention granted for a limited period of time to the patentee by the Government, in exchange of full disclosure of his invention so that no one else forms, use, sell, import the patented product or process for producing that product for those purposes without his consent.

Q2. What are the criteria for patentability?

Answer:  An invention is a patentable subject matter if it meets the following criteria – i) It should be novel. ii) It must be non-obvious iii) Invention should be capable of commercial application.

Q3. What is the Record of Invention?

Answer: A Record of Invention is an internal Lab document written by the inventor and submitted to the Lab’s Patent group using the Innovation Portal.