What is a meteor?

When meteoroids enter Earth’s atmosphere at high speed and due to the atmosphere they burn up, the fireballs or shooting stars are termed as meteors.

What is a meteorite?

When two asteroids collide with each other, there is a small piece that breaks off these asteroids. These pieces from asteroids after the collision are termed as a meteorite.

Difference Between Meteor and Meteorite 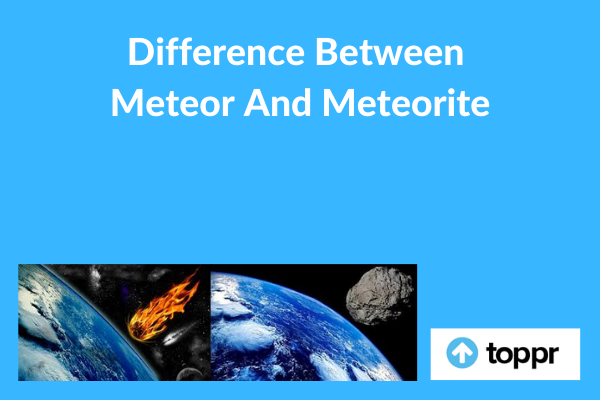 Difference between Meteor and Meteorite

The important difference between meteor and meteorite

A meteor tail caused by a grain-sized meteoroid is about a meter wide but, because of the high speed of the debris, maybe many miles long. When a meteorite hits the earth’s atmosphere, it does it with a high velocity, which makes it look flashy, and like a fireball.

There are different types of meteors depending on their sizes and brightness. Earth grazers are the meteors that streak close to the horizon and have the longest and vivid tails. Fireballs are the common type of meteor, and they are long-lasting and brighter than earth grazers. Bolides are bigger than fireballs and they mostly explode within the atmosphere. We can hear an explosion and felt on the earth as they produce a sonic boom.

A meteorite is a small asteroid, ranging in size from several microns to 1 meter. Meteoroids enter the Earth’s atmosphere at extremely high speeds – from 11 to 72 kilometers per second. Generally, meteorites are very small but their size can range from about a fraction of a gram or the size of a pebble to 100 kilograms (220 lbs). Meteorites having a size smaller than 2mm we classify them as micrometeorites.

We classify meteorites into three broad categories, depending on their structure, chemical, and isotopic composition and mineralogy. Stony meteorites are rocks, which made up of silicate minerals; iron meteorites that are largely composed of metallic iron-nickel; and, stony-iron meteorites that contain large amounts of both metallic and rocky material.

We also found meteorites on the moon and Mars. Scientists have traced the origination of the meteorites found here on Earth to four other bodies they are the moon, Mars, the asteroid named as 4 Vesta, and the comet named Wild 2. Meteorites are the source of a great deal of the knowledge that we have about the composition of other celestial bodies.

FAQs about Meteor and Meteorite

Q1: How common are meteorite strikes?

Answer: Experts say smaller strikes happen five to 10 times a year. But large meteors such as the one Friday in Russia are rarer, but still occur about every five years. According to Addi Bischoff, who is a mineralogist at the University of Muenster in Germany. Most of them fall over uninhabited areas where they do not injure humans.

Q2.What is a Meteor Shower?

Answer: Scientists estimate that about 48.5 tons (44 tonnes or 44,000 kilograms) of meteoritic material falls on the Earth each day. Almost all the material is vaporized in Earth’s atmosphere, leaving a bright trail fondly called shooting stars. We can see several meteors per hour on any given night. Sometimes the number of meteors increases dramatically these events are termed meteor showers.