A barometer is a scientific device that is useful to measure air pressure in a given environment. Pressure tendency can give the forecast short term changes in the weather. Many measurements of the air pressure are in use within the surface weather analysis. It is to help for finding the surface troughs, pressure systems and frontal boundaries. It is a scientific instrument useful to measure the atmospheric pressure which is termed as barometric pressure. In our atmosphere, many layers of air are wrapped around the Earth. This air is having the weight and presses against everything it touches as gravity pulls it to Earth. The barometer is applicable hereto measure this pressure. This article will discuss many aspects of this device in a systematic way. 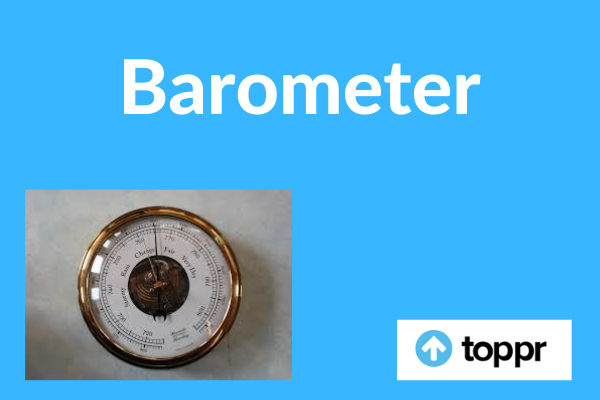 Introduction to the Barometer

The barometer is the instrument uses to measure the air pressure as it varies with the distance either above or below the sea level. It was invented by the Italian scientist E. Torricelli during the year 1643. He studied the characteristics of the mercury, by placing it in the vacuum. He used his theory to develop the first barometer. Before this device, there were the apps which could provide the weather prediction easily, there was the barometer. This device allows us to know whether or not atmospheric pressure is rising or falling. It is an essential tool for the use of weather forecasters and scientists. It is applicable to understand the nature of storms or predicting changes in the weather.

During the BC era, ancient philosophers like Aristotle and Parmenides created the nature abhors a vacuum postulate. Through it, they proved that there was absolutely no possibility of the existence of the vacuum. This was an exciting idea as for a long time people believed no such vacuum could exist. Torricelli decided to expand upon their work further. He already knew that the empty space in the tube could contribute towards vacuum force.

His experimental tool was not only creating a vacuum but also to establish a balance between two different forces. These two forces are:

At the present time, barometers are completely electronic. These can show the pressure reading on an LCD display. The two traditional barometers are the Torricellian and aneroid.

The simplest one is the tall closed tube standing upside down in the bath of mercury. This liquid rises partly up the tube a bit similar to the thermometer, for measuring the temperature. We use the mercury in barometers, as it is more convenient than the water. Since water is less dense than the mercury. Therefore, air pressure will lift a certain volume of water much higher up in the tube than the same volume of the mercury. Thus, with water, we need a really tall tube and hence that barometer will be so enormous impractical for use.

The Torricellian barometer was invented by Italian mathematician Evangelista Torricelli. He has taken the long glass tube. It was closed at one end and filled with mercury. Then he put his finger over the open end and tipped it upside down, and stood it upright in the mercury bowl. He was very careful and hence not to let any air into the tube. Space which will be formed above the mercury column was a vacuum. Actually, it was the first time anyone had ever produced a vacuum in the laboratory. So, this type of vacuum made in this way was termed as a Torricellian vacuum in the honor of its inventor.

At the sea level, the atmosphere will push down on the mercury and make it rise up in the tube up to a height of approximately 760 mm. This air pressure is referred to as one atmosphere or 1 atm. For example, the pressure on the top of Mount Everest is slightly less than the third of normal atmospheric pressure at the sea level. It means it will be roughly 0.3 atm.

Types of the Barometer

Its two main types are as follows:

Actually, Torricellian barometers are useful and giving accurate result, but mercury is poisonous. So, people are avoiding to keep it at home. That’s why most people who own the barometers have ones with easy-to-read dials i.e. aneroid barometers. With the rise or fall in air pressure, the box either squashes inward a tiny bit or flexes outward. The spring is cunningly attached to the box. As the box moves in and out in the response to the changes in air pressure. This spring expands or contracts and moves the pointer on the dial. This dial is calibrated. Thus we can read the air pressure instantly.

Q.1: Give the name of the instrument for measuring the atmospheric pressure.

Solution: Barometer is useful for measuring atmospheric pressure. The aneroid barometer is useful to measure the atmospheric pressure and altitude too. It consists of the evacuated flat cylindrical closed metal box with corrugated flexible faces. These are kept from the collapsing together by the spring. Whereas, the Mercury barometers consist of a glass tube of 80 cm height, closed at one end. In it, barometer works by balancing the mercury in the glass tube against the outside pressure

Q.2: What are some applications of Barometer?

Solution: A mercury barometer is a device that uses the physical properties of mercury in a tube to measure barometric pressure. Mercury Barometers are in use for:-

Q.3: What is the main difference between the manometer and barometer instruments?