Ever since the starting of time, human beings have developed a lot of devices as well as tools for making our work easier and faster. While there are many devices invented, some of them are quite notable like the simple machines such as the inclined plane, the pulley, the wheel and axle, the lever, screw and the wedge. Through this article, we will take a look at the machines which are said to be quite simple but not that easy to understand. Thus, this article will help us go through them in detail. 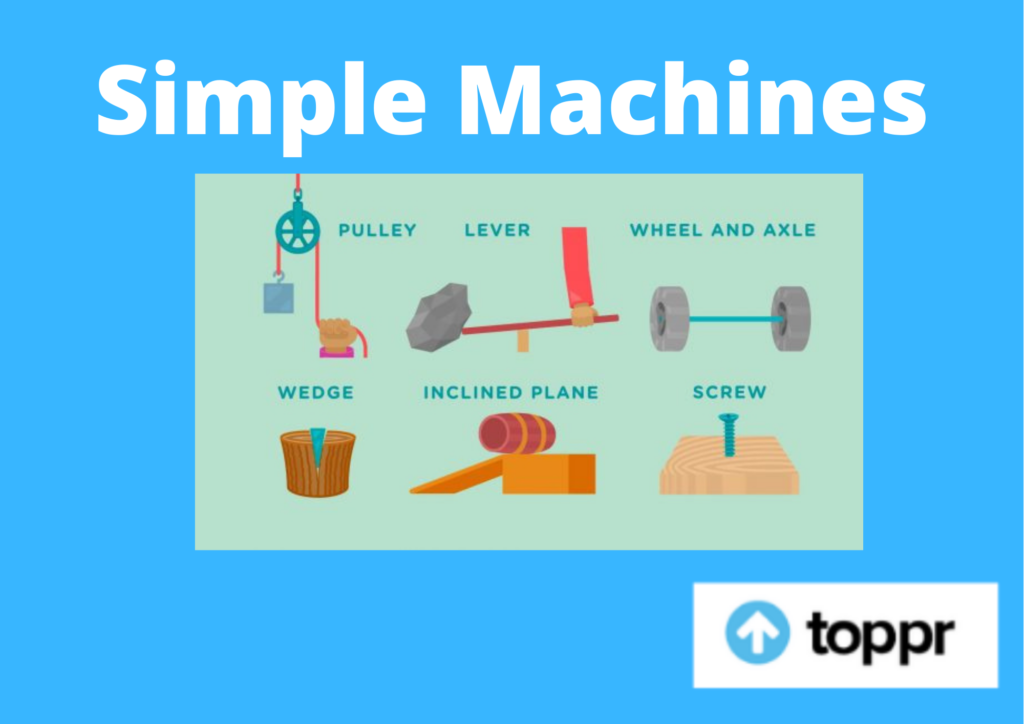 We refer to any mechanical device which changes the direction or magnitude of a force as a simple machine. In common terms, we define them as simple mechanisms that use leverage or mechanical advantage for multiplying force. Moreover, simple machines have few or no moving parts for modifying motion and force. Moving on, we will take a look at the six simple machines in detail.

An inclined plane comprises a sloping plane and we use it for raising heavy bodies. Inclined planes make the task of lifting objects to greater heights easier. There are two ways for raising an object: we can either raise them by lifting it straight up or by pushing it diagonally up.

When we lift an object straight up, it moves the object in the shortest distance but we must exert greater force. On the other hand, when we use an inclined planer for lifting the objects, it will need a smaller force but it should be exerted over a long distance.

Let us take a look at some day-to-day examples of inclined planes to understand it better. It includes the sidewalk ramps you see on your way home. Further, the highway access ramps, inclined conveyor belts, and switchback roads are also examples.

As a replacement for of an axle, we can also use a wheel for rotating a rope, cord, or belt. In other words, the variation of the wheel and axle is the pulley. In a pulley, a cord wraps around a wheel.

It is a simple machine which we use for changing the direction of the force. When the wheel will rotate, the cord will move in either of the directions. However, we can make our work easier by using the wheel’s rotation for raising or lowering objects, if we attach a hook to the cord.

There are many kinds of the pulley which assist us to make a range of lifting and moving tasks easier. For instance, we need a pulley system for hoisting a flag on a flag pole. We attach a rope to the pulley for raising and lowering the flag more easily.

Wheel and axle make simplifies our work by moving objects across distances. The wheel and axle significantly reduce the friction which happens when we move an object. The wheel (round ends) turns with the axle(or cylindrical post) and causes movement. We consider the wheel to be one of the most essential inventions in the history of the world.

Prior to their invention, the amount of load and the distance through which we could carry the load over land was perhaps limited. However, now we see that it is easier to roll a 2000 kilogram block of stone by placing logs underneath it than pushing it all the way.

A lever is a tool which we use for prying objects loose. We also lever for lifting objects. Further, a lever has an arm which turns against a fulcrum. When force is exerted on one end of the pivot, it creates a force on the other end of the lever.

The threads grip the surrounding material such as teeth, which results in a secure hold. Some of the few examples of screws consist of a screw, bolt, clamp, spinning stool, and spiral staircase. An example of a screw being used for lifting something is a car jack.

A wedge is a simple machine which we use for breaking apart the substances when we apply force. A common example of a wedge is a nail. In a nail, the force applies to the wide head area.

This applied force concentrates in a small point area where the force exerts. At this point, the force magnifies and allows the force to pierce through objects. As the nail will sink into the object, the wedge shape at the point of the nail will move forward and will force the object away from each other.

Question 1: What are simple machines?

Answer 1: We refer to any mechanical device which changes the direction or magnitude of a force as a simple machine. In common terms, we define them as simple mechanisms that use leverage or mechanical advantage for multiplying force.

Question 2: What are the compound machines?