Central force is the force that points radially and, the magnitude depends on the distance from the source. Examples of the central forces are the gravitational force, the electrostatic force and the spring force. Following are theories that connect central force to angular momentum:

Theory 1. In order for the object to maintain its angular momentum, it should be subjected only to the central force.

Theory 2. In order for an object to have its motion on a plane, it should be subjected only to a central force. 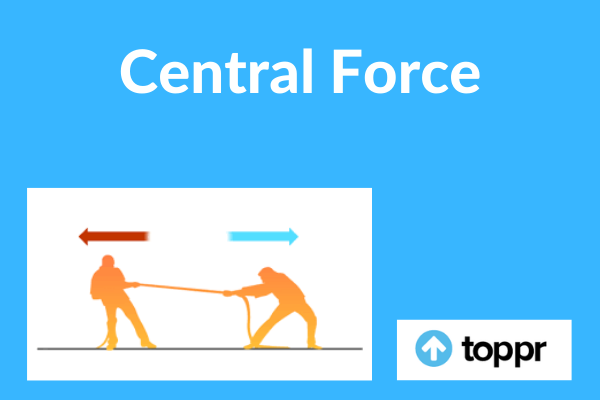 What is the Central Force?

The mathematical equation of the central force is;

R = \(Vector magnitude \left|r\right| is the distance to the centre of force\).

Central force is a conservative force, represented as follows:

F(r) is a magnitude of the central force.

In order to have a particle under central force in a uniform circular motion, the centripetal force should be as follows:

r: is the original radius.

v: is a speed that satisfies the centripetal force equation.

The relevance of the particles central motion of force:

Many natural phenomena define the central force in Physics. Some of the examples are;

There are mainly two kinds observed in central forces field, they are;

Bounded motion: In this motion, the distance between two bodies or objects has similar value and never goes higher than the set figures. Examples of such kind of movement are the motion of the planets around the sun.

Unbounded motion: In this motion, in its initial and final stages, the distance between the two bodies or objects is infinity. An example of this kind of movement is the scattering of alpha particles in the Rutherford experiment.

The derivation of the fields with the help of Lagrangian is as:

(Lagrangian has no \(\theta dependence\)

Q.1. What are some examples of central force?

Answer. Among several famous examples of the central force, most commonly known are Coulomb force and Gravitational force. Respectively, where the force F(r) is directly proportional to the force \(\frac{1}{r{^2}}\). Any object that shows such force F(r) in negative values abides Kepler’s law of planetary motion. Thus, according to Bertrand’s theory,

Q.2. What is the Central Force? Are all central forces conservative?

Q.3. Why does a planet revolving around the sun in an elliptical orbit does not have a constant angular momentum?

Answer. In the elliptical orbit, the sun is at one of the foci, so the distance between the planets and the sun change as the planet rotates, therefore, the linear speed, the kinetic energy and the potential energy of the planets do not remain constant. The angular momentum of the sun remains constant.