According to quantum field theory, the Casimir effect is a physical force. This force is acting on the macroscopic boundaries of a confined space. It arises from the quantum fluctuations of the field. Casimir effect is given after the Dutch physicist named Hendrik Casimir. He predicted the effect of electromagnetic systems in 1948. 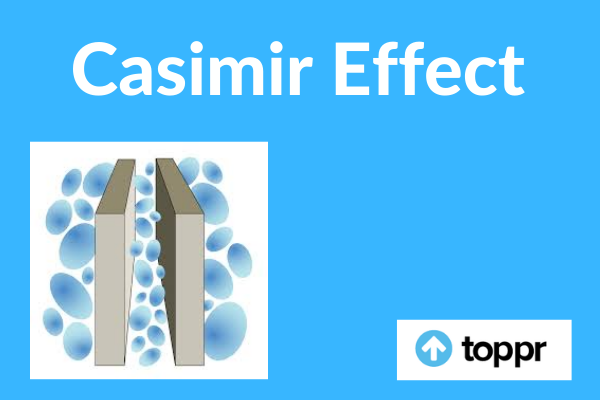 Casimir with Dirk Polder described a similar effect experienced by a neutral atom in the vicinity of a macroscopic interface that is Casimir–Polder force. The result of the Casimir effect is a generalization of the London–van der Waals force. It includes retardation due to the finite speed of light. Though the fundamental principles of leading London–van der Waals force, the Casimir and the Casimir–Polder force, respectively, can be easily formulated on the same footing.

The actual distinction in nomenclature serves a historical purpose mostly and usually refers to the different physical setups. If there are any medium supporting oscillations has an analogue of the Casimir effect. For instance, beads on a string as well as plates submerged in turbulent water or gas illustrate the Casimir force.

Here, ‘h’ is Planck’s constant and c is the speed of light.

Later it was decided to use one plate that is flat and another plate that is a part of a sphere with a large radius to measure the Casimir effect. It is because using two parallel plates would require accurate alignment to ensure they are parallel. In 2001, with the use of microresonators, a group at the University of Padua finally succeeded in measuring the Casimir force between parallel plates.

Question 1: What are the applications of the Casimir effect?

Answer: Few of the applications of the Casimir effect are: