Ever thought about how are the rocks you see around yourself are made up of? How the mountains, the plateaus, the uneven lands, etc. form? In the following points to come, you will get an idea about how the formation of rocks, their types, and also the rock cycle. 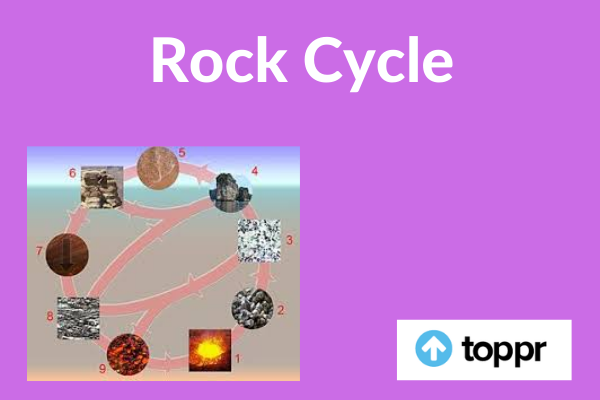 Before entering into the topic of the rock cycle, let us first discuss a little bit about what rocks are. This will build a foundation while understanding the rock cycle. There are 3 main types of rocks i.e. the igneous rocks, sedimentary rocks, and metamorphic rocks. Rocks are classified according to the way they are formed. We consider factors such as hardness, cleavage( how the rocks split), lustre ( how shiny it is), colour, texture, etc.

How rocks are Formed?

Rocks are constantly changing on earth. Most of the rocks on earth are only about 100 million years old. When we see any rock, it is quite obvious that it was of a different shape millions of years ago. The Earth has a very hot core, similar to that of the sun. Rocks constantly change their shape whose process is not visible to the naked eye.

During the weathering process or erosion process, the igneous rocks break down. When this igneous rock mixes with sediments like tiny grains of sand clay, slit, or other bits of rock and it compacts or hardens with pressure, it then takes the form of another type of rock and we call it the sedimentary rock.

Heat and pressure together change igneous and sedimentary rocks when the minerals in the rocks change over time by heating without fully melting the rocks. They form new rocks called metamorphic rocks. The heat requirement is near about 200oC and the pressure requirement is about 1000 bar.

The value of 1 bar is equal to 105 N/m2. In other words, the minerals change or morph. If there is enough heat or pressure, rocks can be folded and squeezed together and then they harden into metamorphic rocks. Slate Marble and quartzite are examples of metamorphic rock. Slate is a metamorphic rock that is formed from shale.

Although the metamorphic rocks are generally formed deep inside the earth because of the need for excessive pressure and heat, they are also exposed to the atmosphere as well. Apart from water and wind, some other forces which are responsible for the conduct of the rock cycle are the tectonic plate movements, continental collision, spreading of the mid-ocean ridges.

Q.1. What is weathering?

Ans: When rocks break apart due to weather elements such as heat, rain, and wind, we call this process weathering. For example, a really strong wind can blow sand particles against a rock and weather it down like a nail file does to nails or sandpaper does to wood.

Ans: When rock wears away with natural forces like the sea waves repeatedly crashing on the shore we call this process erosion. Moving water is the most powerful cause of erosion. Riverbanks are eroded by the flowing river water. Gullies are formed when heavy rains wash away soil and fields. Heavy rain can also cause the loosening of the soil and cause landslides. The Grand Canyon is a great example of the phenomenon of erosion.

Ans: Magma is the molten substance formed inside the earth’s crust from which the igneous rocks are formed. The magma is formed due to the melting of metal near the mantle region due to the heat of the earth’s core. This magma looks for openings on the earth’s crust and comes out through them. A good example is a volcano.

Q.4. What is a chemical sedimentary rock?

Q.5. What is the temperature at which the rocks melt?

Ans: At a temperature range of around 600oC to 1500oC, rocks melt to form magma. Magma is also known as lava on the earth’s surface.