The wind is moving air and is brought about by contrasts in gaseous tension inside our environment. Air under high tension pushes toward territories of low pressure. The more prominent the distinction in pressure, the quicker the wind streams. Essentially, the trade winds or easterlies are the lasting winning breezes. 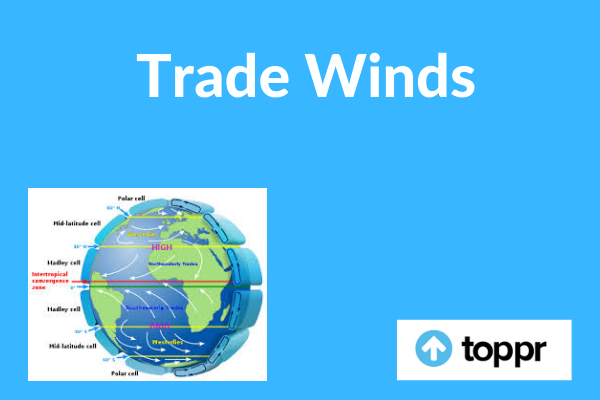 What are Trade Winds?

The trade winds or easterlies are the lasting east-to-west prevailing breezes that stream in the Earth’s tropical locale (somewhere in the range of 30°N and 30°S latitudes). The trade winds blow transcendently from the upper east in the Northern Hemisphere and from the south-east in the Southern Hemisphere, reinforcing throughout the colder time of year. Trade winds have been in use by chiefs of cruising boats to cross the world’s seas for quite a long time. It empowers pilgrim venture into the Americas and shipping lanes to get set up over the Atlantic and Pacific seas.

In meteorology, they go about as the directing stream for typhoons that structure over the Atlantic, Pacific, and southern Indian Oceans. It makes landfall in North America, Southeast Asia, and Madagascar and eastern Africa. Shallow cumulus mists are seen inside trade wind systems and are covered from getting taller by an exchange wind reversal. It is brought about by diving air up high from inside the subtropical edge. The more vulnerable the trade winds become, the more precipitation can be normal in the neighbouring landmasses.

The trade winds likewise transport nitrate-and phosphate-rich Saharan residue to all Latin America. However, to the southwest, to the Caribbean Sea, and to parts of south-eastern North America.

There is no Coriolis impact underneath an on a level plane and uninhibitedly moving object at the equator. As there is no revolution of the outside of the Earth (feeling of turning), and there is no bending of the way for the object as we measure comparative with Earth’s surface and the object’s path is straight. Consequently, causing no Coriolis impact.

Following is the equation of motion for an object in an inertial reference:

m is the mass of the object

The above equation can be written into a non-inertial reference frame is:

v’ is the velocity relative to the rotating reference frame

r is the position vector of the object

a’ is the acceleration relative to the rotating reference frame

Winds that blow as south-eastern exchanges the Southern half of the globe and as northeastern trades the Northern side of the equator. What’s more, It is fundamentally a cause because of the Coriolis impact and Ferrel’s law.

Clouds which structure above areas within trade wind systems are commonly made out of cumulus. It extends close to 4 kilometres (13,000 ft) in height. And are covered from being taller by the trade wind reversal. Trade winds start more from the course of the poles (north-east in the Northern Hemisphere, southeast in the Southern Hemisphere) during the cold season. And are stronger in the colder time of year than the late spring.

For instance, the breezy season in the Guianas, which lie at low scopes in South America, happens among January and April. At the point when the period of the Arctic wavering (AO) is warm. Trade winds are stronger inside the jungles. The cold period of the Arctic oscillation prompts more vulnerable trade winds. At the point when the trade winds are more fragile. More broad territories of downpour fall upon landmasses inside the jungles. For example, Central America.

During mid-summer in the Northern Hemisphere (July), the westward-moving trade winds south of the north moving subtropical edge. It extends to north-toward the west from the Caribbean ocean into south-eastern North America (Florida and Gulf Coast). At the point when dust from the Sahara moving around the southern outskirts of the edge goes over land. Precipitation is smothered and the sky changes from a blue to a white appearance which prompts an expansion in red nightfall’s. Its essence contrarily impacts air quality by adding to the tally of airborne particulates.

Despite the fact that the Southeast USA has the absolute cleanest air in North America. A large part of the African residue that arrives at the United States influences Florida. Since 1970, dust flare-ups have deteriorated because of times of dry spell in Africa. There is a huge fluctuation in the residue transport to the Caribbean and Florida from year to year. Residue occasions have been connected to a decrease in the strength of coral reefs over the Caribbean and Florida, essentially since the 1970s.

Q.1. Why Do the Trade Winds Blow from East to West?

Answer: Trade winds is the cause of strong warming and evaporation within the atmosphere around the equator where the warm air rises rapidly, carrying a lot of moisture. The Coriolis Effect, in combination with an area of high pressure, is responsible for causing the prevailing winds called the trade winds that move from east to west on both sides of the equator. The surface pressure pattern of higher pressure in the eastern Pacific and the lower pressure in the west drives the easterly trade winds. The trade winds start to weaken when the pressure gradient weakens which drives the easterly trade winds.

Answer: Trade winds are the breeze that streams towards the equator from the north-east in the Northern Hemisphere or from the south-east in the Southern Hemisphere. These are otherwise tropical easterlies and are known for their consistency in force and heading. These breezes are in the frame when the hot air rises and hits the equator where it is pulled towards the posts making them chilled. These breezes are in use by the mariners. Christopher Columbus found America with the assistance of trade winds.

Share with friends
Previous
Newton's Third Law of Motion
Next
What Are Electromagnets?