Optics is the popular branch of physics which deals with the determination of behaviour and the properties of the light. It also considers the interactions with the matter and also with the instruments which we need to detect it. Thus, optics describes the behaviours of visible light, infrared light as well as the ultraviolet. According to science, Imaging is possible with the help of a system termed as an image forming optical system.

Actually, optics describes the behaviours and visibility of the matter with the help of light. We are using the light in the form of lasers for very delicate surgery. Also, we are able to watch a football match on TV through the use of fibre optic cables. We are able to bend the light through eyeglasses, microscopes, telescopes as well as the mirrors. This article will discuss the concept of optics in a systematic manner. 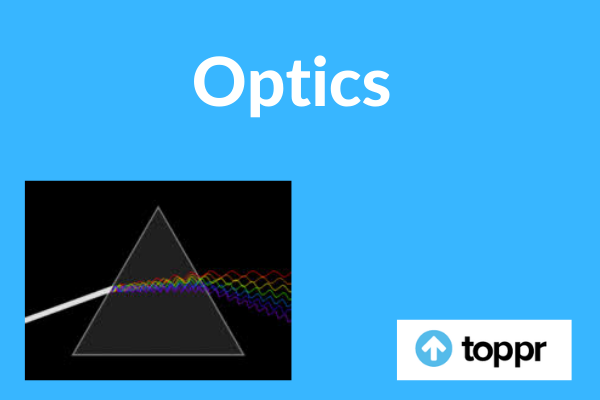 Table of content
1 Introduction to the Optics
1.1 Light and Its optical Concepts
1.2 Categorization of the Optics
2 FAQs about Optics

Introduction to the Optics

The Arab Muslim scholar Abu Ali al Hasan ibn al-Haytham was the famous scientist who was born in year 965 in the city of Basra in Southern Iraq. He gave the very early concepts of optics.

Light is having always the fascination of humankind. Although we take phenomena like reflection, refraction etc as the natural phenomena. Still, people always try to look into these through the scientific aspects. There are many questions that are very interesting if we relate them with the concepts of optics. Some of such questions are-

The law of refraction was discovered by W. Snell in the year 1621. The phenomenon of diffraction was first time observed by both Francesco Maria Grimaldi and Robert Hooke by the years the mid-1600s. Isaac Newton gave great contributions to optics. Approximately, at the same time physicist, Christian Huygens proposed his powerful wave theory of light.

In the history of optics, Thomas Young revived the wave theory at the beginning of the 19th century with the addition of the principle of superposition. The French scientist Augustin Jean Fresnel proposed a mechanistic description of light on the basis of it. As a wave, however, light must have a medium for its propagation. At the end of the 19th century, experiments by Michelson and Morley detected that no motion of the ether relative to the earth.

Light is the form of energy, which exists in the form of an electromagnetic wave and is almost everywhere around us. The Sun is the primary source of light for all the plants to produce their energy.

In physics, light refers to the electromagnetic radiation of different kinds of wavelengths. These radiations may be visible to the naked eye or not. Thus, the gamma rays, microwaves,  X-rays, and radio waves are also the form of lights.

Light and Its optical Concepts

Let us have some fundamental terms related to optics as follows:

It is one of the main properties of light. This process is nothing but what we see the images in the mirrors. Reflection can be defined as the change in direction of light at an interface in-between two different media, and then the wave-front returns into the same medium from which it was originated. For example, a reflection of light includes sound waves and water waves.

This is the rate at which the light travels in free space. It is different for a different kind of medium. It differs from one medium to other. The light travels with 30% slower speed in the water when compared to vacuum.

The bending of the light when it passes from one medium to other medium is termed as Refraction. This property of refraction is applicable in many devices like microscopes, magnifying lenses, corrective lenses etc. According to this property, with the transmission of the light through a medium, the polarization of electrons takes place. Further, it reduces the speed of light, thus changing the direction of light.

When the beam of light strikes with water, then partially the light is reflected, and another part of the light is refracted. This phenomenon is popular as the Total internal reflection. Due to this effect many phenomena we may see in our daily life.

This is the property of light, where the white light splits into its constituent seven colours. This phenomenon can be observed in the form of a prism.

Besides the above, some other properties of light are diffraction and interference.

Categorization of the Optics

Roughly two groups the study for the optics are as follows:

From our day to day experience with light, we know that light travels mostly in straight lines. During the earlier time, optics researchers used the geometry to model this view of light. The light was postulated to travel along with rays. These line segments which are straight in free space, but may change direction with the encounter of the matter.

Two main related laws are there- law of reflection and law of refraction. One direct consequence of this ‘bending’ of light rays can be seen when an object half-submerged in a glass of water will appear to be bent. From these laws, we can determine the behaviour of optical devices like telescopes and microscopes.

If we look again at the ray of light, may find another aspect of optics. The fringe property experiment shows that there is a very small central bright spot with rings surrounding it. We cannot explain these rings by the use of geometrical optics alone, and hence wave nature of light came into the picture. Physical optics is the study of the wave properties of light, which will be roughly grouped into three categories of interference, diffraction, and polarization.

Q.1: Why is the study of optics important?

Solution: It is the study of facts like how light reflects off of the objects, or the energy of other forms of electromagnetic waves. This study of optics has many applications to the technology on earth.

Q.2: Who has discovered the ray optics?

Solution: By the beginning of the 17th century in the year 1604 Johannes Kepler, a German astronomer, published his book on optics. In this book he also postulated that an extended object could be regarded as a multitude of separate points, each point emitting rays of light.

Q.3: What are the different types of wavefront?

Solution: According to the source of light, wavefront can be of the following three types:

Q.4: What are the main applications of optics?