Zener diode is similar to the ordinary PN junction diode. But, normally it is operated in the reverse biased condition. This diode is a specially designed, highly doped PN junction diode. Therefore, we may say that a heavily doped semiconductor diode, designed to operate in the reverse direction is referred to as the Zener diode. Also, we may say that the diode which is specially designed for optimizing the breakdown region is the Zener diode. It means that the n-type material of the diode is connected to the positive terminal of the power supply. Also, the P-type material is connected to the negative terminal of the power supply. The depletion region of the diode is very thin due to having heavily doped semiconductor material. This article will give extensive knowledge about the Zener Diode. 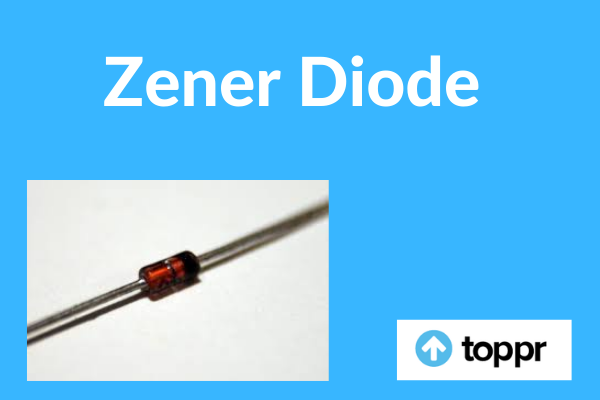 Introduction to the Zener Diode

A Zener diode is the silicon semiconductor device which permits the current to flow in either forward direction or reverse direction. This diode consists of the special and heavily doped p-n junction. It is designed to conduct in the reverse direction while certain specified voltage is reached.

The Zener diodes are having the well-defined reverse-breakdown voltage. At such voltage, it starts conducting the current. Furthermore, it continues operating continuously in the reverse-bias mode without any damaged ahead. Also, the voltage drop across the diode remains the constant value over a wide range of voltages. This feature makes the Zener diodes suitable for use in the voltage regulation.

This diode operates similar to the normal diode when in the forward-bias mode. And it has the turn-on voltage of values between 0.3 V and 0.7 V. whereas when connected it in the reverse mode, which is usual in most of its applications, then a small leakage current may also flow. Since the reverse voltage increases to the predetermined breakdown voltage. So, a current starts flowing through the diode. The current increases to its maximum level. It can be determined by the series resistor, after which it stabilizes and remains the constant over a wide range of applied voltage.

Zener diodes are varying in the specifications like the nominal working voltage, power dissipation, maximum reverse current as well as the packaging. Some commonly used specifications of Zenor Diode include the following:

Zener diodes are applicable for the voltage regulation, as the reference elements, as the surge suppressors, and also in switching applications and clipper circuits. Its detailed applications are as follows:

The load voltage equals the breakdown voltage Vz of the diode. The series resistor limits the current value flowing through the diode. It also drops the excess voltage when the diode is conducting. Thus, it provides the constant voltage from the fluctuating voltage source to the load. For this purpose, Zener diode is connected in parallel across the load.

If the input voltage increases to the value higher than its breakdown voltage. Then, the current flows through the diode and hence creates a voltage drop across the resistor. This drop will trigger the SCR and as a result, creates a short circuit to the ground. The short circuit opens up the fuse and hence it then disconnects the load from the supply.

Thus, it is generally in use in the multimeters also for controlling the movement of the meter against any overloads. So, it is connected in parallel with the diode. It protects the meter from damage also.

Zener diodes are in use to modify or shape the AC waveform clipping circuits. The clipping circuit limits or some parts of one or both of the half cycles of an AC waveform. It is needed to shape the waveform or provide protection. Therefore the Zener diode is useful for converting the sine wave into the square wave. This is possible by placing the two Zener Diodes in series with the resistance. It is connected back to back and in the opposite direction.

Q.1: What is the main purpose to use a Zener diode?

Solution: Zener diodes are useful mainly for voltage regulation, as reference elements, surge suppressors, and also in switching applications. The load voltage of it equals the breakdown voltage of the diode. The series resistor limits the current through the diode and thus it drops the excess voltage.

Q.2: What is the meaning of Zener breakdown voltage?

Solution: The Zener Breakdown is happening in the Zener diodes having Vz less than 5V or sometimes between 5 to 8 volts. When the reverse voltage is applied to the Zener diode, it causes a very intense electric field appearing across that narrow depletion region.

Q.3: What is the minimum Zener current?

Solution: The current of a Zener diode is having the maximum current that can flow is Iz-max. Typically there is also the minimum current requirement for its operation. This can be around 5 mA to 10 mA for a typical led of 400 mW.

Q.4: Suppose the Zener diode fails. Then what will happen?

Solution: When Zener diodes fail due to excessive power dissipation, then it is readily detected, as it drops to almost zero voltage, like a piece of wire.

Q.5: What is the need to heavily dope the Zener diode?

Solution: Zener diodes are always considered as the highly doped diodes. It means their behaviours in the forward bias will be same as the normal diode. However, in the reverse bias, their junction potential will be increased. Therefore, when the voltage crosses 6V then the diode will have a reverse breakdown. And hence the current through the diode will increase rapidly.