A periscope is an instrument to monitor over, around, or through some object, obstacle or condition. Those conditions may prevent direct line-of-sight observation from the observer’s current position. Therefore, we can say that the periscope is the optical instrument that allows viewing those objects which are not in direct line of sight of view. Periscopes are for the great help for the working of submariners. As it allows these professions to view above the surface of the water. It then works like aid in the navigation under the water. A simple type of periscope only needs mirrors, but a more complicated periscope utilizes prisms too. It works on the basis of the laws of reflection of light. Any object in the line of sight reflects the light making it will be visible in the periscope. 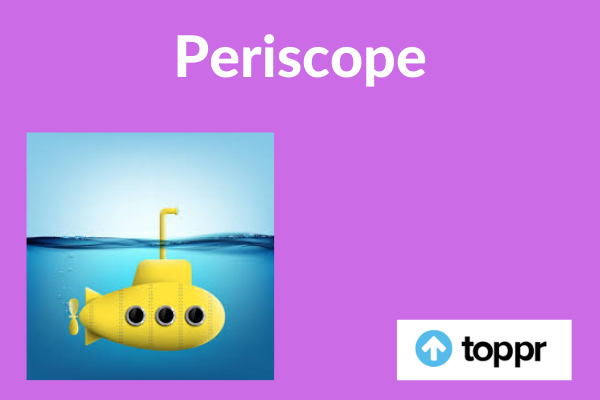 Introduction to the Periscope

A periscope is popular as the instrument useful for observing over and around some surface like sea surface for the submarines. It is also applicable to view through some obstacle or object which may be prevented by the direct line of sight. This device consists of an outer case with mirrors at each end at an angle of 45 degrees. These mirrors will be placed parallel to the surface. The first submarine periscope was designed and invented by Jules Carpentier. It was mainly used earlier during World War Second in tanks and armoured vehicles.

The mirrors are placed at an angle of 45 degrees, so that when light falls on one of the mirrors, then it gets reflected back making it fall on the other mirror. The second mirror further gets reflected back to the observer’s eyes. But in some complex types of periscopes, prisms are more useful in place of mirrors. This instrument does not produce any magnification and crossline of the images.

The image developed by the plane mirror is virtual and laterally inverted. When a light ray reflected by the first mirror shifts incident ray for the second one. Then this laterally inverted incident ray gets reflected by the second mirror and results in the virtual image without any lateral inversion. The image formed in the periscope is virtual without the lateral inversion. This is because two lateral inversions cancel each other. The periscopes useful in submarine applications are complex. These are requiring the use of tubes that are at least 10 meters in length to achieve a greater range of scope.

Recent developments in science and technology have incorporated the use of fibre optics components in the periscopes too. Fiber optic periscopes like in the cystoscopes and endoscopes are in use by medical physicians. These help to view the organs of a human body without requiring invasive procedures.

In general, it is a long, tubular device through which a person can see objects which are out of the direct line of sight. The periscope makes use of two plane mirrors to see over the top of things. Remember that mainly it works on the reflection of light from two plane mirrors arranged parallel to one another.

Periscopes are available in any kind of application. But, are mostly in use in submarines for general doing navigation and detection. These are found in the radars also to determine the potential nearby threats. Similarly, these are in use on battlefields to look out of trenches safely without exposing the body of the observer. One of the most widely used applications of these devices is in medicine. This is due to its ability to be less obtrusive method diagnostic techniques in comparison to the surgical procedures.

Thus, we may summarize its usages in the following:

It is useful for observation. It consists of a tube attached with mirrors at each set parallel to each other. Also, it may have two simple lenses, which depends on the occurrence of regular light reflection on the plane mirrors.  Periscope allows the submarine to search visually any nearby targets and the threats on the surface of the water. It is also in use in the submarines to see the events which are happening behind a wall or a barrier.  Some complex periscopes operate on submarines and in different fields of science. Generally, it can observe over the obstacles between 9 to 26 meters in the height. It helps to determine the distance of the torpedo attack with the determination of the correct time to fire the torpedo at high speed.

For more than 80 years, the USA Navy are utilizing the technology of the periscope inside their control room of almost every submarine. With the advancement of technology, the integration of sensors into submarine technology is expected to increase the market value of Periscopes. This growth in market value has been supported with the increase of deployment of the attacks. One such advancement in the submarine sensor technology was recently developed by Virginia-Class engineers. It is known as a “Fly-by-Wire” technology. Also, the software behind this technology allows the user to direct the movement of the ship purely through the use of the software and electronics.

In the view of effort for the further advance periscope technology within the medical field, the medical holography market has implemented endoscopic technology. Besides this, several other imaging technologies are now expanding this field. A hologram is a recording device that is for the visual representation of the interference pattern. It is formed when a reference light beam of a specified wavelength meets the light of the same wavelength as it hits the object beam. Thus in the medical community, researchers are working towards improving such systems for the betterment of humankind.

Q.1: Why periscopes are having a Z shape?

Q.2: Mention some varieties of applications of Periscopes:

Solution: These are synonymous with their use in submarines mostly. It is for general navigation and detection. In a similar kind of threat detection application, periscopes are often useful on the battlefields too. One of the most widely used applications for periscopes is now in medicine. It then helps for its less obtrusive method of diagnostic techniques.

Q.3: Mention the difference between telescope and periscope?

Solution: Telescope is a monocular optical instrument that possesses the magnification capacity of distant objects. Mainly in the astronomy field. Whereas, periscope is the form of viewing device which allows the viewer to see things at different height levels. Also, it works in a situation with minimal visibility.