We are surrounded by a sea of different frequencies form natural as well as artificial sources. These frequencies are modulated or jumped up by a phenomenon known as resonance. Resonance actually causes waves to be of similar frequency and thus result in a higher amplitude meaning more intensity.

Galileo Galilei observed that a man alone could ring a large bell by giving impulses at the right instants and they were so huge that four to six men were lifted up from the ground trying to seize the impulse holding the rope. This justifies to the earliest encounters of what resonance was capable of. 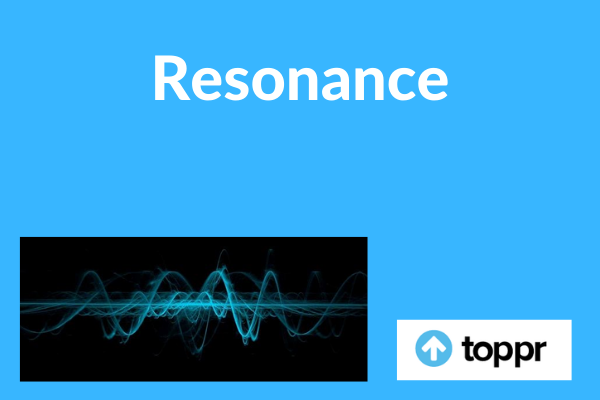 Resonance occurs with all kinds of existing vibrations such as in quantum wave functions, electron spin resonance(ESR), mechanical resonance, electromagnetic resonance, acoustic resonance and nuclear magnetic resonance(NMR). It is useful in different ways including generating a vibration of a required frequency or filtering specific frequency from a complex vibration containing many frequencies. Resonance is possible when a body is capable of storing and transferring energy between different states and forms of energy. As the cycles go on, some losses incur. This is damping.

The resonant frequency is approximately equal to the natural frequency in case of small damping, but in other cases, it has multiple, different resonant frequencies. In daily life, radio waves are tuned to produce resonance to selectively receive waves of specific values. Modern clocks also use resonance for their timekeeping mechanisms.

The tendency of a mechanical system to give a response with large amplitude when the frequency of its oscillations is similar to the system’s natural frequency of vibration rather than other frequencies. Some examples of this type of resonance include pushing a swing, motion of a pendulum, motion of a tuning fork. In all of these cases, the force applied to cause the vibration should be periodically regulated to match the natural frequency to create resonance. The resonant frequency of spring is:

m is the mass of the spring

k is the spring constant

The resonant frequency of a pendulum is:

g is the acceleration due to gravity

l is the length of the pendulum

When an acoustic system has waves with matching frequencies with one of its own natural frequencies, it amplifies the sound. This is acoustic resonance. This is a very crucial tool for instrument builders as in case of many acoustic instruments like strings of a guitar, length of a flute and membrane of a drum used resonators. It also accounts for hearing ability.

When 2 mirrors, one partially reflective and other highly reflective are part of a laser, they form an optical resonator. Interferometers and some optical parametric oscillators use optical resonators because it has a large Q factor which suggests less amount of energy loss. Lasers which provide the gain medium and provide feedback of laser lights using these resonators.

Resonance of a Damped Oscillator

This type of system is visible in spring-mass systems, pendulum systems and many other damper circuits like the RLC electrical circuit. When we consider a spring-mass system driven by an external sinusoidal force, we can come to the differential equation:

m is the mass

x is the displacement from the mean position

\(\omega\) is the driving angular frequency

k is the spring constant

c is the damping coefficient

Alternatively, we can write the equation as:

In many cases on close and concentrated analysis, resonant frequency comes out to be near not exactly equal to the natural frequency.

Here, the resonant frequency is not equal to the undamped angular frequency of the oscillator.

Q.1. What are the uses of resonance in molecules?

Answer. Molecular and atomic resonance contains two phenomena Nuclear Magnetic Resonance(NMR) and Electron Spin Resonance(ESR). NMR is useful in imaging techniques in advanced medical industries such as MRI. The resonant frequency of NMR happens to be directly proportional to the strength of the applied magnetic field. This method helps in imaging objects that are in a non – uniform magnetic field, as the resonant frequency of the molecules of the object depend on the location of the nuclei and hence the imaging. A similar kind of technique known as the ESR makes use of the unpaired electrons that is the paramagnetism of the molecules. ESR is helpful in detecting inflammation and monitoring conditions of arthritis, vasculitis or inflammatory bowel disease.

Q.2. How does resonance play a part in tuning musical instruments?

Answer. In case of the tube instruments, the tube provides a column for air to vibrate and the length of that air column decides the harmonics that are produced and the sound we hear aloud. We can adjust the length of the tube to create a vibration with a frequency close to the natural frequencies of the air column inside the brass instrument and thus the result is a loud sound. We can acknowledge higher pitches by further shortening the column and the vibrating reed helps the air column to get to vibrate at one of the natural frequency.

Q.3. What is orbital resonance?

Answer. Orbital resonance occurs when celestial bodies due to their orbital periods being in the ratio of small integers exert a regular, periodic gravitational influence on each other. Laplace was the first scientist to examine the stability of the solar system. This stability is because of the changing gravitational forces of the celestial bodies which go around each other.