Timbre is a quality of musical tone to distinguish between two sounds when they are of the same frequency. Every sound we hear depends on its source. Sound timbre is known as the characteristic waveform of sound that depends on the material from which it produces. In physics, the sound characterises as pitch, frequency, loudness, and timbre. Timbre is one of the properties of a sound wave that distinguishes the characteristics of a note. According to researchers, the variation in timbre is observable when there is a 4dB change in mid-or high-harmonics and a 10dB change in low-harmonics. 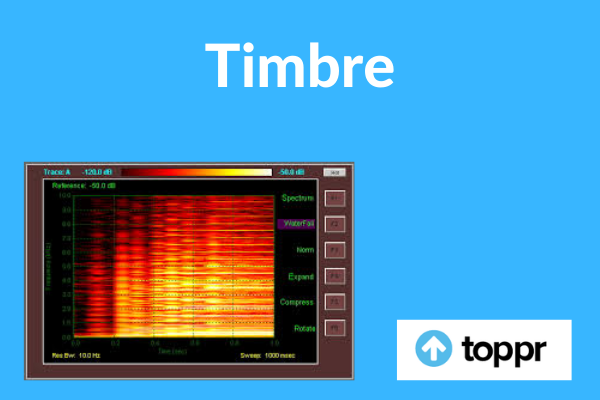 Table of content
1 Theory of Timbre
1.1 Timbre in Music
1.2 Factors that Affect the Timbre
1.3 Characteristics of Timbre
2 FAQs about Timbre

In order for any sound to be detectable, the sound must have one fundamental frequency and seven additional harmonics, and the human ear can not distinguish any sound that does not have them.

In music timbre, the distinctive tone of the instrument or voice that is formed from the amplification by a singer or instruments of various harmonics or overtones of a fundamental pitch. As a result, highly nasal timbre stresses distinct overtones than mellow timbre. The timbre of tuning fork and the stopped diapason organ pipe is clear and pure because the sound they make contains almost no overtones. The shape of the instrument determines the timber. The frequency range in which the instrument can create overtones and by the envelope of the instrument’s sound, the timbre of speaking or singing voices changes by tightening or opening different parts of the vocal tract, such as the lips, tongue, or throat.

The timbre of a sound depends on its waveform, which varies with the volume of overtones or harmonics present, the frequency and relative intensities.

Factors that Affect the Timbre

So, what are the factors that affect the timbre in music? There are multiple factors, varying on the instrument. For example, the way someone pushes air through the oboe will lead to the sound frequencies produced from it, and how it is received, causing a unique timbre.

Things like forced air, breath control, body posture, and so on are also a few factors that impact timbre. Minor differences in frequency are also a consideration – how many you can hear, its relationship to pitch, and how intense they are.

The shape of the instrument and the envelope of the sound also influences its timbre. The sound waves vary when playing the same note from one instrument to others.

There are several types of characteristics of timbre, such as; Dull, Thin, Cold, Heavy, Rich, Clean, Delicate, Nasal, Thick & Light.

Q1. Which sound characteristic enables us to distinguish one sound from another having the same pitch and loudness?

Answer. The sound waves made by various vibrating bodies differ in quality or timbre. For example, a note from a saxophone varies from that of the same pitch and intensity created by a violin or xylophone; similarly vibrating reeds, columns of air and strings also differs. Quality depends on the number and relative intensity of the overtones produced by the vibrating body, which, in turn, depend on the nature of the vibrating body.

Answer. Timbre or sound quality is that characteristics by virtue of which we can distinguish between sounds of the same pitch and loudness produced by two different musical instruments or voices. Example: When two musicians perform the same note on two various musical instruments, such as piano and harmonium, the notes easily differentiate their sound quality from each other.

Q3. What is the difference between pitch and timbre?

Answer. Pitch and timbre play a key role in both voice and music. Pitch helps one to hear the tone in a melody, language and notes. Timbre helps to differentiate between vowels and consonants that make up words, as well as the distinctive sound qualities of various musical instruments.