We all know that an aeroplane is much fast compared to other modes of transport. Have you ever wonder how fast an aeroplane can fly? But what happens if aeroplanes fly in much higher speed than sound. The aeroplanes suffer shock wave that affects the blade of the aeroplane. Mach number plays a very important role to study these matters. We can compare the speed of an object with the speed of sound by the help of the Mach number. It is also a tool to determine if a flow is incompressible or not. 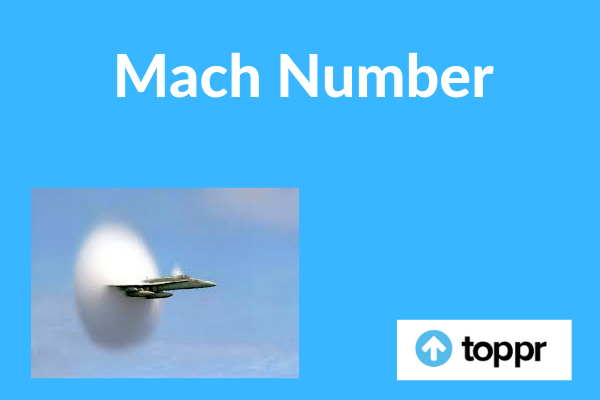 Mach number is an important quantity to compare the speed of any object with a speed of sound. It is a parameter to denote the speed of a flying object in air medium. In fluid dynamics, it has very vast use. Mach number is heavily studied to have a proper idea on the motion of aeroplanes and rockets. By definition, it is a dimensionless quantity expressing the ratio of the velocity of an object in a medium to speed of sound.

Generally, the Mach number is represented with the symbol ‘M’.

Where v= Speed of the object in a medium with respect to some boundary either internal or external.

And c =Speed of sound in the local medium.

When an aeroplane is flying in the sky the air particles nearest to the body of aeroplane get disturbed. If the aeroplane has a higher velocity it provides a compressing effect on the surrounding air. Hereby judging the Mach number we can say that the fluid is compressible or not. Mach number has no dimensions because it is the ratio of two velocities having the same dimensions.

According to the variation of Mach number fluid flow is classified.

Subsonic: For these type of flow the Mach number remains below 0.8. Commercial aeroplanes flowing in this range have a round nose and leading edges.

Supersonic: When the object flow with greater velocity than the sound it is said to have supersonic velocity. It has a Mack number greater than one. Aeroplanes have proper designs to undergo supersonic speed.

Hypersonic: When the speed of an object is much higher than the speed of sound the flow is called hypersonic. The range of Mach number is five to ten in this case.

The design of aircraft is done according to the Mach number to get the best result. Also, we know that sound moves in the form of waves. In air medium, the movement of these waves depends on various factors such as temperature and pressure of the air.

We know that when a fluid flows over a solid surface, a thin membrane of fluid sticks to the surface and acquires the same velocity of the surface.

Answer: When an aeroplane flies with more speed than the sound that is supersonic a shock wave is produced. In this condition major changes in temperature, pressure takes place.This shock effect is heard by the people in the ground similar to a clap sound.

Q.2 Discuss incompressible fluid with the help of Mach number?

Q.3 How Mach number changes with change in medium and height?