Hearing is one of the most significant means of survival in the animal world. Similarly, speech is one of the most unique characteristics of human development and culture. Consequently, the science of acoustics spreads across many facets of our society like music, architecture, warfare, medicine, industrial production and more.  Acoustics refers to the branch of physics which deals with the study of mechanical waves in solids, liquids and gases. It includes topics like vibration, sound, ultrasound, and infrasound. You will notice the application of acoustics exists in almost all aspects of modern society with the most evident being the audio and noise control industries. 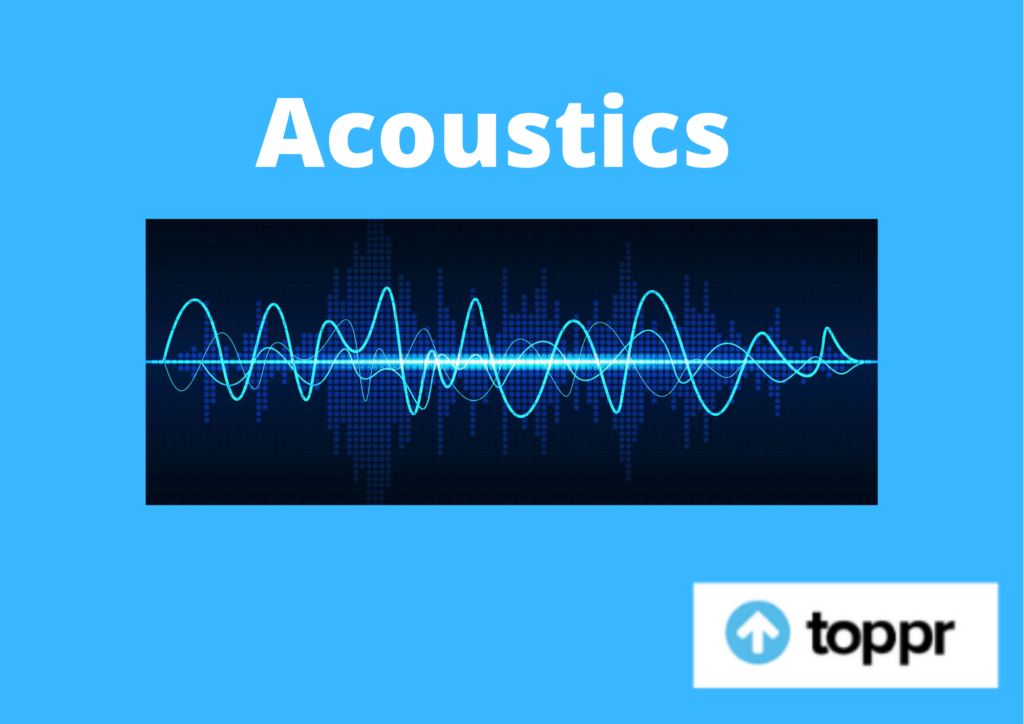 You know by now that acoustics is the branch of physics dealing with the study of sound which includes its production, transmission and effects. An acoustician is a scientist or researcher who studies acoustics.

Further, anyone who works in the field of acoustics technology is called an acoustical engineer. The major application of acoustics is making the music or speech sound as good as possible.

We achieve it when we reduce the sound barriers and increase the factors which help in the proper transmission of sound waves. In the beginning, we used acoustics only in industries which were based on sounds such as auditorium and theatre.

However, now, the application of acoustics has spread to a lot of fields such as medicine, warfare, architectural industries, and many more.

The Latin synonym is ‘sonic, after which the term sonics used to be a synonym for acoustics and later a branch of acoustics. We refer to frequencies above and below the audible range as ‘ultrasonic’ and ‘infrasonic’, respectively.

Any acoustic event consist of the stages given below:

The process in which some other form of energy converts into sonic energy and produces a sound wave is referred to as transduction process. The sound waves transport energy throughout the propagating medium.

The acoustic wave equation is the basic equation which describes sound wave propagation. This is basically the main process in any of the acoustic events. Sound propagates in liquids as a pressure wave and in solids as longitudinal or transverse waves.

There are multiple kinds of acoustician, however, they generally possess a Bachelor’s degree or higher qualification. Some have a degree in acoustics, while the others get into this discipline through studies in fields like physics or engineering.

Most of the work in this field needs a good grounding the discipline of Mathematics and Science. Similarly, many scientists of this fieldwork in research and development. Further, some carry out fundamental research for advancing our knowledge of the perception of speech, music and noise.

Archaeoacoustics, is also called the archaeology of sound and we use it to experience the past with senses other than our eyes. Further, Aeroacoustics refers to the study of noise which the air movement produces.

Next, Acoustic signal processing is the electronic manipulation of acoustic signals. Architectural acoustics. also called building acoustics, deals with the scientific understanding of how to achieve good sound within a building.

There are different kinds of acoustics, we will take a look at them to get a better understanding.

This one concerns the study of physics of music which is how we use sounds for making music. Areas of study in this comprise of the human voice, musical instruments, and music therapy.

These are basically sounds that have a frequency greater than the human audible limit. But, there isn’t any difference in physical properties when we compare them to normal sound. We use it in a lot of fields. Similarly, we use ultrasonic devices to measure distances and detect objects. Moreover, we use ultrasound imaging in physics.

These are the sound which has a frequency of less than 20 Hz. We refer to the study of these sounds as infrasonics. We use infrasounds for detecting petrol formation under the earth and the likelihood of earthquakes.

This is the study of how many mechanical systems vibrate and interact with their environment. We use this for vibration control that assists in protecting a building from earthquakes and ground vibrations which we use in railways.

Question 1: What are the types of acoustics?

Answer 1: There are different kinds of acoustics. They include environmental noise, musical acoustics, ultrasounds, infrasounds, vibration and dynamics.

Question 2: What are the stages of any acoustic event?

Answer 2: Any acoustic event consists of the stages given below:

Question 3: What do you mean by ultrasounds?

Answer 3: Ultrasounds are basically sounds that have a frequency greater than the human audible limit. But, there isn’t any difference in physical properties when we compare them to normal sound. We use it in a lot of fields. Similarly, we use ultrasonic devices to measure distances and detect objects. Moreover, we use ultrasound imaging in physics.