By the definition, a celestial body is a natural object outside of the Earth’s atmosphere. For examples, Moon, Sun, and the other planets of our solar system. But, actually, these are very partial examples. The Kuiper belt is holding many celestial bodies. Any asteroid in our space is the celestial body. This article will give the necessary details about the celestial bodies in a simple manner. 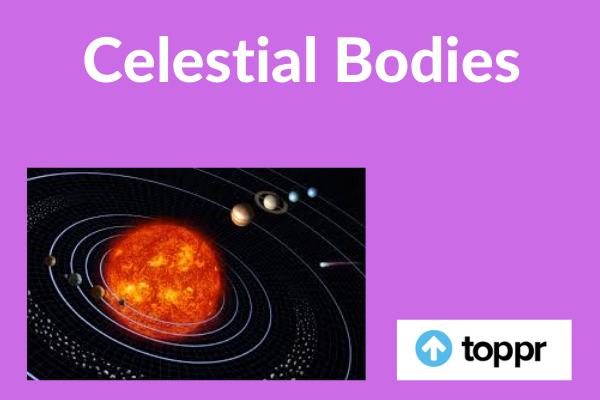 Celestial bodies are also termed as heavenly bodies. These are the objects in our space like sun, moon, planets, and many stars. These are forming a part of the vast universe in which we are living. The glorious night sky is having dotted appearance with such objects. When anyone observes them using the telescope, these are looking very fascinating. As these are so far away, we cannot see all of them using our naked eye. Thus we need the telescopes to study them.

Our universe is containing an amazing collection of celestial objects or astronomical objects. Though most of the observable cosmos is composed of the empty space. Still, this cold, dark void which is sparsely populated by the number of astronomical objects. These are ranging from the common to the bizarre. These are the stuff which is filled with the empty space of the universe.

We all are familiar with the stars, planets, and moons. But besides these, many celestial objects, are lying with an amazing collection of other sights. These are colourful nebulae, delicate star clusters as well as the massive galaxies. Pulsars and quasars are further adding to this mystery. Also, the black holes swallow up every bit of the matter which comes too close. This search is on to identify the mysterious, invisible objects termed as dark matter.

Classification of the Celestial Bodies

Stars are the giant balls of the hot gases which can produce their own light. They give out the energy by converting Hydrogen gas into Helium in their own cores. Stars are very gigantic in their size and are having an immense gravitational attraction. Our sun is a medium-sized star giving us energy and making our life possible on earth.

These are those large spherical objects which are revolving around the sun. Planets are in motion in the fixed orbits around the sun. There are eight planets in our solar system. Planets may be made up of rocks, metals and gases such as hydrogen, nitrogen and methane. Our earth is also a planet and is the only known place in our universe having a life. Those Planets which are revolving around other stars are exoplanets.

Satellites are those objects which are revolving around planets. These are forming the essential part of many celestial bodies. These may be natural or maybe a human-made. The moon is our natural satellite. It is revolving around it because it is bound by the Earth’s gravitational pull. Human has also placed artificial or man-made satellites around the earth and other planets. This is for doing study and for communication purposes.

These are the small chunks of ice and rock which come from the outer edge of the solar system. While the closeness of these with the sun, their ice on them vaporizes, and hence creating the beautiful tail behind them.

These are the small and irregularly shaped rocks made up of metal or minerals having orbit around the sun. Mostly these are found between Mars and Jupiter in the area known as the asteroid belt.

These objects are from the space that enters our atmosphere due to the gravitational pull of our Earth. Meteors are usually small and burn up objects in the atmosphere as they enter the earth. It creates the streaks in the sky as though a star has fallen. These are commonly called shooting stars. If a meteor is large enough it can reach up to the surface of the earth and create the crater. These are termed as meteorites.

Galaxies are meant for the large groups of stars, holding together through gravity. The sun and the solar system is the part of our galaxy, which is popular as the Milky Way. Other galaxies are usually so far away that these are looking like stars in the night sky. The Andromeda galaxy and the Large Magellanic Clouds are the galaxies which can be seen with the naked eye on a clear night.

Planetary geology is the field of investigations for the planets. This includes the study of all celestial bodies like planets, moons, asteroids, and comets. A planet is the large celestial body having revolution around the star. A moon is also a type of celestial body that revolves around a planet. Our planet, Earth is having only one moon. But other planets are having multiple moons.

Planets and moons are the larger celestial bodies available in our solar system. Comets are the small celestial bodies constituted of small rock fragments. Most comets orbit the sun and take many years to complete the journey. There are also some comets which are having their journeys taking 3 million years.

When a comet getting closer to the sun, then it begins to evaporate, which releases a stream of molecules behind the comets. Asteroids are the small celestial bodies orbiting around the sun. These are mainly having rock and metallic components. If asteroids collide among themselves, then they can be thrown off their normal orbits and travel in any direction. This results in an asteroid colliding with another celestial body, most frequently planets.

Q.1. Is our Earth a celestial body?

Solution: Our Earth was not considered as the planet. But rather it was considered as the central object around which all the other celestial objects orbiting. It is different from the terrestrial planets like Mercury, Venus, Mars etc.

Q.2. What are the seven main heavenly bodies?

Solution: Mainly seven celestial bodies are adopted the heavenly bodies. These are as follows:

Solution: Celestial bodies are keeping the relative balance due to gravitation and movement. Due to their appearance, all celestial bodies are like equidistant. Also, their relationship with observers is similar to the relationship between a point on a sphere and the centre of a sphere. This imaging sphere centred at the observer having any random radius is the celestial sphere.

Solution: The pole star is a brightly visible star. It is approximately aligned with the axis of rotation of the earth. Therefore, it is having an apparent position close to one of the celestial poles. Also, it lies approximately directly overhead when viewed from the Earth’s the North Pole or the South Pole. This is the reason due to which it always remains in the same position in the Sky. We can easily locate it with the help of the Saptarishi.