Since childhood, you have always looked up at the night sky and have seen the twinkling stars. But, have you ever looked up into a clear sky and thought of any planets around? If not, then let us get an idea about what distant planets in our solar system look like and which are visible and which are not visible technically to the naked eye. The human eye can see all of the planets at one time or another apart from one planet known as Neptune. 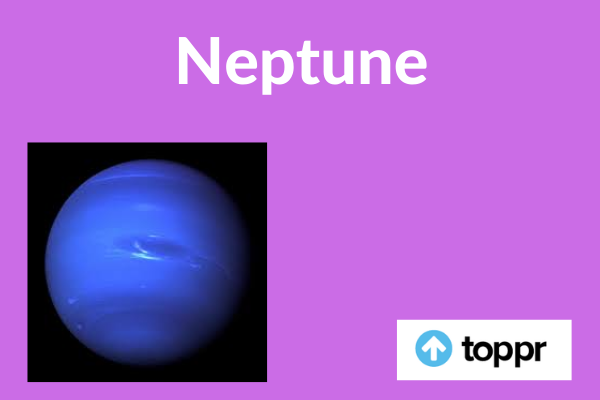 Table of content
1 Introduction to Neptune
1.1 Peculiar Characteristics of Neptune
1.2 Celestial Bodies Revolving around Neptune
1.3 Presence of Life on Neptune
2 FAQs about Neptune

After the demotion of Pluto to “not a planet” status, Neptune became the farthest planet in our Solar System. It is the 8th planet starting from Mercury as the first one. The discovery of Neptune is based on mathematical prediction until modern-day technology found its existence during the initial period of the 21st century. Neptune is very similar to Uranus (the 7th planet) and can be considered as its twin. 4.5 billion Kilometres are a considerable amount of distance and that is exactly the distance of Neptune from the Sun. The time needed for Neptune to go around the sun for one time is 165 years. This period of 165 years is also known as 1 Neptunium Year. Hence, we can say that we have seen only Neptunium year since its discovery in the year 1846.

The planet Neptune was discovered on an assumption that there was a presence of a celestial body which was disturbing the orbit movement of Uranus according to the models prepared by the scientists at that time. Urbain Le Verrier first predicted the presence of Neptune after which Johann Galle was able to find it only a degree away from the predicted point.

The name Neptune has been given after the name of the Roman God Of the Sea. Neptune is considered the only planet in our Solar System that has been predicted mathematically. It appears bluish-green. Cold methane cloud rotates around it. These methane rings are of zero degrees centigrade. It is almost about 17 times larger than Earth. Its natural satellite named Triton was discovered after 2-3 days of its discovery. It takes about 4 hours for the sunlight to reach Neptune. The radius of Neptune is around 16000 miles or roughly around 24600 kilometres. One Astronomical unit is around kilometres. Neptune is 30 such Astronomical Units away from the Sun.

This much distance from the Sun means that the average temperature in the planet’s atmosphere is very low, i.e. around. Talking about its axis of rotation, Neptune is tilted about 28 degrees similar to that of Mars (25 degrees) and Earth (23 degrees). This means that the seasons on Neptune are similar to those on Earth and Mars. Although the major difference is that these seasons if present on Earth, then they will last 40 years each. The name of the spacecraft which discovered Neptune was Voyager 2 and interestingly it took around 13 years for it to go and discover it. The temperature of the planet’s core is around.

Neptune has a very faint series of rings which was discovered in the year 1984. Neptune is also called an Ice Giant along with Uranus. Neptune’s orbital eccentricity is0.0097 and is the second smallest behind that of Venus. One more important fact regarding Neptune is that its Surface gravity is about 1.15 times that of Earth.

Neptune’s largest moon is Triton. It was the first discovered moon of Neptune. Having a radius of about 1350 kilometres, the surface is mostly frozen nitrogen. The surface temperature is around 38.15 Kelvin. One interesting thing about Triton is that it orbits around its mother planet in a direction opposite to the rotational direction of Neptune. The other moons revolving around Neptune are Thalassa, Naiad, Nereid, Proteus, Neso, Hippocamp, etc. In total there are 14 moons discovered to date. There are no asteroid bodies majorly in and around Neptune. William Lassell discovered Triton.

Triton keeps one of its face oriented towards the planet at all times. The rotational axis of the Triton is about 40 degrees. The moons of Neptune are considered as regular or irregular based on their shapes of orbits. Triton, the most important one is considered an irregular one. Although despite having so many moons they do not collide because of their shapes of orbits.

Presence of Life on Neptune

As modern-day technology is continuously searching for life in outer space, the search for life on Neptune is also carried out but because of extreme atmospheric conditions, it is very difficult for life to sustain on Neptune. This bluish-green planet has a very high wind speed of about 2000 kilometres/hour which is a supersonic flow. Along with that, the frosty weather on the surface of Neptune makes it difficult for life to grow on the planet. Neptune’s atmosphere is also very unsteady in terms of temperature. Up till the troposphere, the temperature has a decreasing gradient nature whereas once the stratosphere starts the temperature gradient is positive, i.e. temperature increases with an increase in height.

At high altitudes the methane level decreases and hydrogen level increases to about 80% and the rest are helium. Neptune also has the property of internal heating. Although Neptune is the farthest planet now and receives only 50% of the sunlight, still because of this internal heating property, winds are generated on the surface of this gas giant. About 2.5 times the heat received from the sun is radiated back by the iced planet.

Q.1. Why is methane gas present on Neptune?

Answer: The Sun is about 900 times dimmer on Neptune as compared to on Earth but still because of the internal heating property it has released frozen methane gas into its atmosphere.

Q.2. Why is Neptune Bluish-green in colour?

Answer: The reason is the absorption of red and the infrared light from the sunlight that it receives. Methane gas atmosphere absorbs this light.

Q.3. What are the various kinds of spots on the Neptune surface depicts?

Answer: The big and small spots depict the storms that pass by the atmosphere of Neptune. In the year 1989, when Voyager 2 passed by the planet, it saw the Great Dark Spot, a storm of about the size of Earth passing through its atmosphere.

Q.4. Why Neptune has a very short day?

Answer: Neptune needs 16 hours to complete one rotation about its axis. Neptune has the third shortest day among all the eight planets in the solar system.

Q.5. What will happen to Neptune if the Sun dies out?

Answer: The sun is expanding every day. Although it has reached only half of its life, eventually as it is a star it will die out one day. If such a thing happens then, planets like Neptune and Uranus will come very close to the sun’s surface.

Q.6. What is orbital eccentricity?

Answer: Orbital eccentricity means by how much amount an orbit of an astronomical body revolving around another celestial body deviates from being a perfect circle.

Q.7. How are the rings of Neptune named?

Answer: The names of the rings around Neptune are given after the names of the astronomers who helped in getting a detailed picture of the iced planet. These are Galle, Le Verrier, Lassell, Arago, and Adams.