The Sun, moon and the stars are located in the Solar system. The sun is the principal component of a Solar system and also regulates it. All other celestial bodies are gravitationally bound by the Sun. Let us understand the solar system in detail in this article. 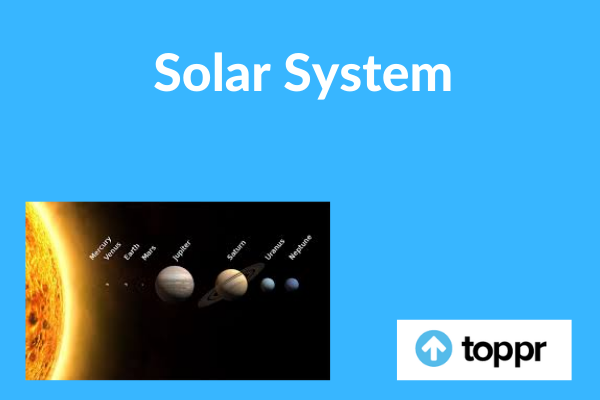 A Solar system is a gravitationally bound system which comprises of the Sun and the celestial bodies that orbit around the sun whether directly or indirectly. As the name suggests, the major component of a Solar system is the Sun. The Sun is the biggest star and is situated at the centre of the Solar system.

The size of the Solar system is huge and is at least 100 Astronomical units i.e. 15 trillion km. The age of the solar system is around 4.6 billion years.

Structure of the Solar System

The complete structure of the solar system thus consists of the Sun, inner or terrestrial planets (Mercury, Venus, Earth and Mars) surrounded by a belt of rocky asteroids and giant planets (Jupiter, Saturn, Uranus, Neptune) surrounded by the Kuiper belt of icy objects.

The components of the Solar system are:

Sun is the biggest star in the solar system and consists of 99.86% of all the mass of the solar system. It is located in the centre and is a sphere of hot plasma. Continuous nuclear reactions take place in its core which radiates energy in the form of light and infrared radiation. Sun is the most significant and primary source of energy for life on Earth. Its mass comprises approximately 73% of hydrogen, approximately 25% of helium and remaining of oxygen, carbon, neon and iron.

The solar system consists of eight planets, namely, Mercury, Venus, Earth, Mars, Jupiter, Saturn, Uranus and Neptune. Mercury is closest to the sun and also the smallest planet. It has no natural satellites. Venus has a thick silicate layer around its iron core. It is the hottest planet and is drier when compared to Earth. It also has no natural satellites. Earth is the only planet where life exists. It has a unique hydrosphere and 21% free oxygen to sustain life. Moon is its one and only natural satellite. Mars has an atmosphere of mainly carbon dioxide. It is red in colour due to the iron oxide in its soil. Deimos and Phobos are its two natural satellites.

The mass of the Jupiter is 2.5 times the mass of all other planets. It is made up of hydrogen and helium and has 79 satellites. Saturn has an extensive ring system made up of small ice and rock particles. It is less dense than water and has 82 satellites. Uranus is the lightest planet among the giant planets and has a much colder core. It has 27 satellites. Neptune radiates more internal heat in comparison to Uranus and has 14 satellites.

Asteroids are big and irregular shaped pieces of carbon, rock or metal which can be found mostly in the asteroid belt, orbiting the Sun between Mars and Jupiter. These are also often called minor planets as they are much smaller in comparison to the planets. They are not visible with the naked eyes and are visible using binoculars or small telescopes.

These are small and irregular shaped objects composed of ice. It is believed that they generally come from the Kuiper belt. Kuiper belt is the outermost region of the solar system beyond Neptune. When comets come close to the Sun, due to the heat the ice vaporizes and leaves a beautiful tail behind them. Halley’s Comet is one of the comets that appear once every 76 years and is also visible with the naked eye.

A star is a celestial object that consists of a luminous spheroid of plasma which is bound by its own gravity. During the night, they are easily visible with a naked eye. A star shines because a thermonuclear fusion of hydrogen into helium takes place in its core. These are grouped into constellations and asterisms.

A dwarf planet is an object that is in direct orbit of the sun and has not cleared the neighbourhood around its orbit like a planet but is not a satellite. It can be found in various places. Pluto was earlier a planet but now it has been categorized as a dwarf planet.

Q.1. What is the age of the Solar system and how was it formed?

Answer. The age of the solar system is 4.6 billion years. It was formed from the gravitational collapse of discs of dust and gas orbiting around the sun.

Answer. Edmond Halley discovered Halley’s Comet in 1705. It is a short-period comet which is the only comet that is visible to the naked eye and appears after every 76 years. It last appeared in 1986 and will now appear in 2061. Halley’s Comet consists of a mixture of water, carbon dioxide, ammonia and dust. It has a nucleus, coma and tail.

Q.3. What are giant planets, terrestrial planets and dwarf planets?

Answer. Any planet which is much larger than Earth is a giant planet and is usually mainly composed of gases or ices which are low-boiling point materials. Jupiter, Saturn, Uranus and Neptune are four giant planets.

Terrestrial or inner planets are mainly composed of silicate rocks or metals and have a solid planetary surface. These are closest to the Sun and are situated between the Sun and the asteroid belt. Mercury, Venus, Earth and Mars are four terrestrial planets.

A dwarf planet is an object that is in direct orbit of the sun and has not cleared the neighbourhood around its orbit like a planet but is not a satellite. The dwarf planets are smaller than the planets but larger than the asteroids. Pluto, Ceres, Eris, Haumea, Makemake, Gonggong, Quaoar are some of the dwarf planets. Pluto was earlier a planet.