The universe is unpredictable. It consists of many bodies i.e. some are known to us rest not. Planets are the part of the universe which resolves all around the sun. Let in detail about planet here in this article. 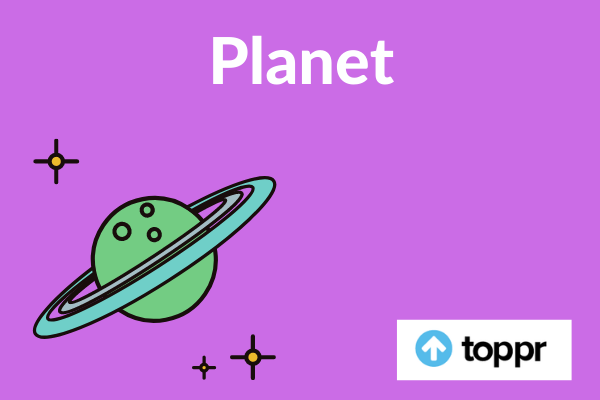 The word planet signifies ‘wanderer’. This is on the grounds that the planets do seem to wander sluggishly over the night sky. The stars likewise move over the sky from east to west. However, in comparison with one another, they seem fixed. The planets, appear to be to move comparatively with the fixed stars in reverse and advances bearings. This is the reason they were called Wanderers.

We can characterize Planet as – the planet is a divine body spins around the sun in fixed circles. Planets don’t have the light of its own yet mirror the light of the sun. They likewise don’t sparkle like different stars as they are excessively near us. Till now the earth is the main realized planet to hold life and have the ideal condition.

Planets in the Solar System

There are currently eight planets in the solar system that revolve around the sun in their own fix orbits. These are:

Note that, Pluto is not considered as part of our solar system. Though, it does not fulfil the conditions set by IAU (International Astronomical Union)

The planets of the Solar System on the basis of their composition are:

Terrestrials: Planets with bodies to a great extent made out of the rock. Planets like Earth, Mercury, Venus, Earth and Mars. At 0.055 Earth masses, Mercury is the littlest and earth is the biggest terrestrial planet in the Solar System.

Ice giants: Uranus and Neptune, are fundamentally made out of low-breaking point materials. For example, water, methane, and alkali, with thick climates of hydrogen and helium. They have an essentially lower mass than the gas giants.

It’s the closest planet to the sun and is additionally the littlest planet in the nearby planetary group. It takes around 88 days to finish one unrest (to be precise 88.97 days) which is the littlest time span. Its size is marginally bigger than the size of the moon of earth. It doesn’t have numerous moons and climatic conditions that are not positive for any type of life as it is excessively close to the Sun. Its surface temperature goes from 100 K around evening time to 700 K during the day.  This high diurnal scope of temperature is there on the grounds that the planet has no environment to hold. It’s the second densest planet in our nearby planetary group. It is the littlest tilt in its hub among all the planets in the nearby planetary group.

At the point when seen from the Earth, it’s the second most brilliant (after the noticed moon) planet. Take 224.7 Earth days to finish one transformation and 243 Earth days for a pivot on its hub. It takes the greatest time span among all planets to finish one turn. It turns the other way to all planets aside from Uranus (from West to East). It’s additionally seen that one day on Venus is equivalent to one year on Earth. It’s likewise called Earth’s twin sister due to its comparable size, shape, mass, and closeness to the sun. However, it is not reasonable for human settlement since it contains 96% carbon in the environment.

It’s the third planet from the Sun and is the main realized planet to hold life. The Earth age is around 4.5 billion years of age. It takes 365.264 days to finish one transformation around the Sun and 24 hours to finish one pivot on its hub. After every four complete unrests (4 years) it takes a day longer 366 days to finish unrest). It is covered by 71% of water and its hull is partitioned into various structural plates (lithosphere). Earth’s deepest part stays dynamic and its internal centre is strong. The external centre of the earth is fluid which produces Earth’s attractive field.

It’s the fourth planet from the sun and furthermore the second-littlest in the nearby planetary group. Its red tone additionally makes it known as the red planet (presence of iron oxide). It has two moons Phobos and Deimos. Its gravity is 38% of the Earth’s gravity. It takes 687 Earth’s day and one full Mars year (16,500 hours).

It’s the fifth planet from the Sun and the biggest planet among all. It’s likewise probably the most brilliant thing that can be found in the sky with the unaided eye. Jupiter is a monster bundle of gases with a one-thousandth mass of the Sun. It does not have an all-around characterized surface.

It’s the 6th planet from the Sun and the second-biggest planet among the close planetary system. It’s a goliath gas planet with a normal span that is multiple times the sweep of the earth. The internal centre comprises of iron and nickel. An electric flow inside the hydrogen layer offers to ascend to the attractive field of Saturn. This is somewhat less than the world’s attractive field.

It’s the seventh planet from the Sun and has the fourth-biggest planet by mass and third-biggest by span. It’s likewise alluded to as ice monsters and its essential segment is like Jupiter and Saturn. However, it additionally has more frosts. For example, methane, water, and smelling salts and furthermore hints of hydrocarbons. It turns the other way from all the planets aside from Venus (it pivots from west to east).

It’s the eighth planet from the Sun. It’s the fourth-biggest planet by breadth. The third most gigantic planet and is the densest earth. It’s somewhat bigger than Uranus and Neptune. It circles the Sun every 164.8 years and is denser than Uranus and actually more modest than Uranus.

Answer: Fifth planet from the Sun and the biggest planet among all the planets in the Solar System. Perhaps the most splendid thing that can be found in the sky with the unaided eye. A monster bundle of gases with a one-thousandth mass of the sun. It does not have an all-around characterized surface. Because of the fast revolution of the planet, it’s present in the oblate circle shape.

Question 2: What is a Planet?

Answer: Planets are cosmic bodies circling around a star or heavenly.  It is sufficiently large to have its own gravity to gather together. Yet isn’t sufficiently large to have and furthermore cause atomic combination. They have freed its neighbouring area from planetesimals. A divine body that spins around the sun in fixed circles. Planets don’t have light of their own however mirrors the light of the Sun. They likewise don’t sparkle like different stars as they are excessively near us.

Question 3: Is Pluto a Planet?

Until 2006, Pluto was viewed as a planet since it demonstrated numerous attributes of a planet. In any case, the International Astronomical Union gave another meaning of a planet. A planet is an item that:

Pluto doesn’t fulfil the last rule as its circle is jumbled by a comet-like object. Consequently, it is presently a dwarf planet.