For a very long time, people thought comets were divine omens or celestial wanderers which would flash through the solar system before they vanished into interstellar space. However, all this began to change in 1705, when Edmond Halley came out with his “Synopsis Astronomia Cometicae.” He took the help of Sir Isaac Newton’s gravitational theories to chart the paths of two dozen comets and brought his new theory regarding the same. Thus, in this article, we will take a look at Halley’s Comet in detail. Through this information, students will get a better idea of this comet. Moreover, it will be helpful in learning about its history and more. 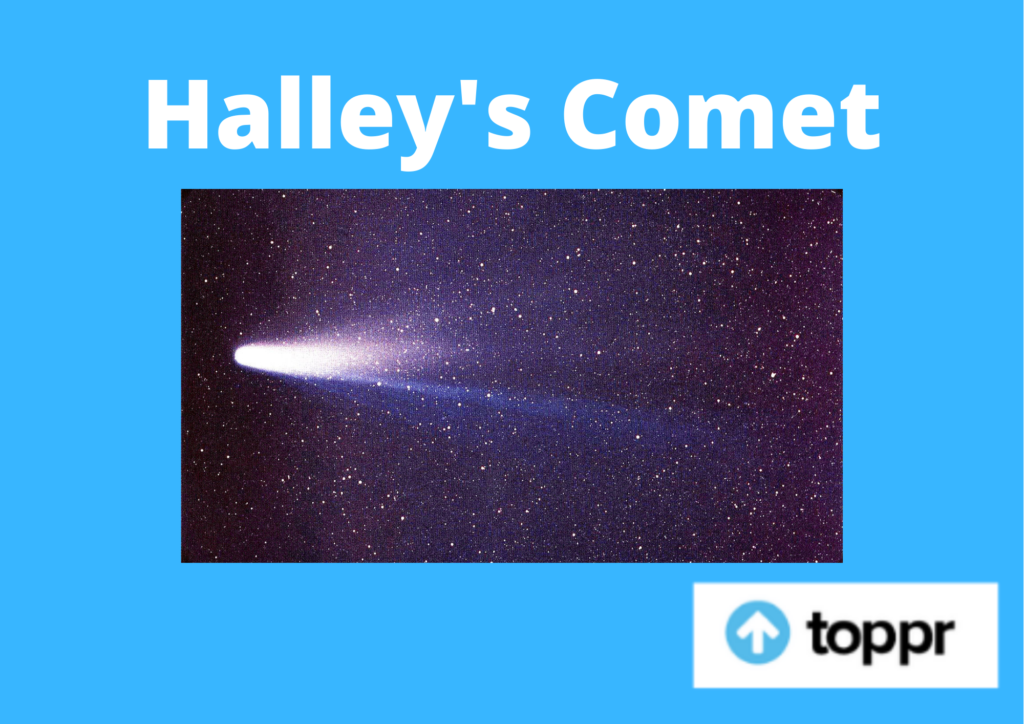 What is Halley’s Comet?

Growing up, we’re sure you must have definitely heard of Halley’s Comet. It is without a doubt, one of the most popular comets. We also refer to it as the 1P/Halley. Basically, it is a periodic comet which returns to Earth after every 75 years. It was here in 1986 the last time and as per the projections, it will return in 2061. The name of the comet has been kept after Edmond Halley, an English astronomer. He was the one who examined the reports of a comet which was approaching the planet Earth in 1531, 1607 and 1682. After many studies, he finally came to the conclusion that these comets were the same which kept returning over and over again.

Origin and Orbit of Halley’s Comet

It is believed that Halley’s Comet has originated from the Kuiper Belt. Some blocks of rock and ice, which are significantly the leftover matter from the formation of the solar system around 4.6 billion years ago, they pull deeper into the Solar system and turn into active comets.

We classify Halley’s Comet under a periodic or a short-period comet, with the orbit which lasts for 20 years or less. This is contrary to the long-period comets where the orbit lasts for thousands of years and it originates from the Oort cloud.

The orbit of Halley’s Comet around the Sun is highly elliptical and retrograde. In other words, it orbits around the sun in the opposite direction to the planets. Because of the retrograde orbit of the comet, its velocity is the highest relative to the Earth.

Structure and Composition of Halley’s Comet

As Halley’s Comet approaches the sun, it expels jets of sublimating gases from its surface. This results in it knocking it very slightly off its orbital path. Thus, this procedure makes the comet create a bright tail of ionizing gas and a faint one which is composed of dust particles.

We also refer to the ion tail as a coma that spans up to 100,000 km across and comprises of volatiles like water, methane, ammonia and carbon dioxide. Regardless of the vast coma, Halley’s comet is comparatively small. It has a nucleus of 15 kilometres long, 8 kilometres wide and around 8 kilometres thick.

Further, the mass of the comet is anticipated to be around 242.5 billion tons. Further, the average density of it is said to be 0.6 g/cm3. Similarly, many observations say that the gases which it ejects comprise of 80% water, 3-4 % carbon dioxide, 17 % carbon monoxide with traces of hydrocarbons.

As you know by now, we saw Halley’s Comet last in 1986. Thus, people expect that we will see it next in the year 2061. True to form, some people are preparing themselves for the words and believe that it denotes the end of life. However, the other contemplate whether they will even live long enough to see it.

Role of Halley’s Comet in Myths and Superstitions

As we all know, Halley’s Comet has quite a long and rich history when we talk about it being observed by humans. Considering the most recent visits of this comet, it has been visible from our planet Earth on 30 separate occasions.

Similarly, we see that the earliest record goes back to the Shih Chi and Wen Hsien Thung Khao chronicles. It was written in China ca. 240 BCE. Many people believe that the Babylonian scribes recorded the appearance of Halley’s Comet when it returned in 164 and 87 BCE.

But, the most popular appearance of this comet happened shortly before the 1066 invasion of England by William the Conqueror. While King Harold of England considers the comet as a bad omen. William and his conquerors thought it was a signal of their imminent victory, as per the legend goes.

When we look back at the Middle Ages, we see that the appearances of this comet in the night sky were considered to be heralds of bad news. In other words, it indicated that either the person of royal standing passed away or dark days were coming soon.

The reason behind this was probably because of the erratic and unpredictable behaviour of comets when we compare them to the Sun, the Moon and the stars. However, as developments were made in modern astronomy, this view of comets was mainly driven out.

Nonetheless, there are still many people out there who consider it to be the doom and gloom. They believe that Halley’s comet will strike our planet and trigger an extinction-level event.

Question 1: What is the structure and composition of Halley’s Comet?

Answer 1: Halley’s comet is comparatively small as it has a nucleus of 15 kilometres long, 8 kilometres wide and around 8 kilometres thick. Further, the mass of the comet is around 242.5 billion tons. Moreover, the average density of it is 0.6 g/cm3. Similarly, many observations say that the gases which it ejects comprise of 80% water, 3-4 % carbon dioxide, 17 % carbon monoxide with traces of hydrocarbons.

Question 2: When will Halley’s Comet Return?

Answer 2: Halley’s comet will continue to journey away from the Sun until it reaches its aphelion (furthest point from the Sun at 35.1 Au) on 2nd November 2023. After that, it will start it’s long 37.6 years fall back towards the Sun. Thus, as per the predictions, the Halley’s Comet will next reach perihelion (closest point to the Sun) on 28 July 2061.

Question 3: Who is Edmond Halley?

Answer 3: Edmond Halley was an English astronomer who examined the reports of a comet. This comet was approaching the planet Earth in 1531, 1607 and 1682. After many studies, he finally came to the conclusion that these comets were the same which kept returning over and over again.